They are perhaps the ultimate monuments to music - the final resting places of some of rock's most iconic fallen heroes.

Metal, hard rock, punk – all across United States you can find sites that have become pilgrimages for fans from all over the world - a chance to pay respects to the musicians - and the music - that changed lives.

Here's Epting's tour of 10 notable graves that Noisecreep feels should be part of any rock 'n' roll road trip.

The late Randall William "Randy" Rhoads was rated by Rolling Stone magazine as number 85 in The 100 Greatest Guitarists of All Time. On March 19, 1982, Ozzy Osbourne's band was headed to play a festival in Orlando, Fla. They stopped at the bus driver's house in Leesburg, Fla. after driving much of the night. The driver (and sometime pilot) Andrew Aycock, took Rhoads and hairdresser Rachel Youngblood on a plane ride early that morning. During the flight, an attempt was made to "buzz" the tour bus where the other band members were sleeping. They succeeded three times but the fourth time tragedy struck. The right wing clipped the right side of the tour bus by accident and careened into a nearby mansion. Nobody in the mansion was hurt. But Rhoads, age 25, was killed instantly, as were Aycock, 36, and Youngblood, 58. 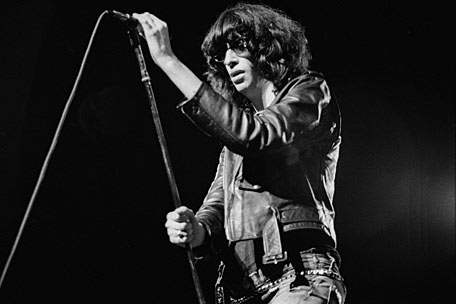 During his youth, soon to be punk star Hyman was considered something of an outcast who had a dysfunctional family life. Growing up on the streets of Queens, N.Y., he was a fan of The Who and the Rolling Stones, took up drums at 13, and helped form the Ramones in 1974. Upon Tommy Ramone's suggestion, he switched to vocals after starting out as the group's drummer. Hyman was said to be the "heart and soul" of the Ramones, and his favorite songs from their repertoire often were the ballads and love songs.Hyman died of lymphoma at New York-Presbyterian Hospital on April 15, 2001. He apparently had had the cancer for a long time though few knew of his condition. Countless memorials, both by fans and the rockers he influenced, followed his passing. At death, Hyman was listening to the U2 song "In a Little While." This was during U2's 'Elevation Tour,' and from that point on during shows, U2 singer Bono would dedicate the song to Joey.

Jimi Hendrix, of course, was the guitarist best known for his masterful prowess on the electric rock guitar. A gifted singer and songwriter, Hendrix was not merely a rock musician, he was a dynamic presence and performer who changed the course of rock and roll music. His roots were steeped in the blues, R&B, and soul, and he spent many years prior to his superstardom as a backup guitarist in various blues and R&B groups. His debut album Are You Experienced was a product of his group the Jimi Hendrix Experience, which he formed in 1967. Hendrix died of drug related problems only four years after he became an international star while in London in 1970.

It was while attending Fairfax High School in Los Angeles that musician Hillel Slovak met future band mates Jack Irons, Anthony Kiedis, and Michael Balzary (also known as Flea) who would soon form the Red Hot Chili Peppers. Hillel and Anthony developed serious heroin habits early in their careers, which is the vice that that ultimately led to Hillel's death. He was once fired from the Peppers for a short amount of time because of his crippling addiction. During the European tour supporting The Uplift Mofo Party Plan album, more serious drug problems became apparent, and Slovak was found dead of a heroin overdose on June 25, 1988. He was just 26.

Following two albums that alienated many fans (1979's Dynasty and 1980's Unmasked), and a falling-out with Peter Criss over his drug abuse problems and general unreliability, KISS held open auditions for a new drummer and discovered Eric Carr. At the time of his audition, the Brooklyn native (then known as Paul Caravello) was cleaning stoves for a living, while playing drums in a variety of bands. After joining KISS, he changed his name to Eric Carr, and adopted the persona of "The Fox," with his makeup design reflecting the character. Carr is often cited by fans as a favorite among drummers in the band's history, for his intense playing style and trademark timing, which was extremely different from the soft-by-comparison jazz-influenced technique of Criss. Eric was also part of the band's well-publicized removal of their stage makeup in 1983. Carr died of cancer in 1991.

He and his band Quiet Riot helped put American metal on the map with the smash album, Metal Health, the first #1 metal album in U.S. history. Known for his scrappy, manic onstage presence, striped microphone stand and trademark suspenders, DuBrow died of what was believed to be an accidental drug overdose at his home in Las Vegas.

One of metal's most iconic frontmen, the elfin warrior known to many as just "Dio" started his career in 1957 and over the years led many well known bands. He was originally a bassist in the upstate N.Y. club scene, and changed his name from Ronald James Padavona in 1961. Dio joined Rainbow in 1975, then Black Sabbath in 1979, replacing Ozzy Osbourne. In 1982 he formed his own band, Dio. His famed "horns" hand gesture, inspired by his Italian heritage, has come to define the genre. Dio died in 2010 from stomach cancer and a huge public memorial was held at Forest Lawn, the place where he is laid to rest today.

Gray, also known as "#2, The Pig," in the band he co-founded, Slipknot, was almost as famous for his extremely grotesque masks as he was his bass work. In 2003 he filled in as bassist for the band Unida, and performed with several other bands, too. At the time of his death he was one of three original members of Slipknot left in the band. On May 24, 2010, Gray was found dead in an Iowa hotel room, and it is believed he died from an accidental drug overdose. In September 2012, Gray's physician was charged with involuntary manslaughter for writing high-dose prescriptions to Gray. He pleaded not guilty

The lead guitarist of the mighty Pantera joined the band Damageplan after the former band broke up. On December of 2004, Abbott was shot and tragically killed onstage at the Alrosa Villa Club in Columbus, Ohio, along with several other people, by a 25-year old gunman named Nathan Gale. Damageplan had just started playing when the shooting began. Gale was killed by a police officer that had arrived on the scene after the shooting started.

The New Jersey native's big break came in 1985 when then Black Sabbath vocalist Glen Hughes had a falling out with the band as they had started touring for their Seventh Seal album. Gillen took the job, a huge moment for the gifted singer after years toughing it in the club scene with groups like Rondinelli and Harlette. After recording the Eternal Idol album (his vocals were redone by Tony Martin), Gillen, along with future KISS drummer Eric Singer, quit Sabbath to form the underrated blues-inspired hard rock group Badlands with former Ozzy Osbourne guitar hero Jake E. Lee. Badlands released three studio albums, before Gillen left the group and helped form the band Sun Red Sun. Sadly, Gillen died from complications related to AIDS in 1993.