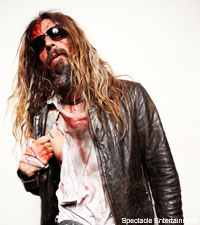 Don't count on ever hearing more than three or four songs from Rob Zombie's new album ever played live -- and he won't be rotating them, either. "There are songs on there that we will never play live," Zombie tells Noisecreep. He hits the road for a limited time with Alice Cooper in Canada, April 26 to May 4 for the so-called Gruesome Twosome Tour. Then in July co-headlines the 25-date Rockstar Energy Drink Mayhem Festival from July 10 in San Bernadino, Calif. through to Aug.14 in Oklahoma City, Okla.

On his fall 2009 tour in advance of the Feb. 2 release of 'Hellbilly Deluxe 2: Noble Jackals, Penny Dreadfuls and the Systematic Dehumanization of Cool,' the band played two new songs, 'What?' and 'Sick Bubblegum,' and they won't be upping it now that the album is out.

"You can only play so many. Three, four songs tops off a new record because the more time that goes by, the more songs you have that people expect to hear," says Zombie, whose music career dates back to White Zombie's 'Soulcrusher' in 1987 and solo debut, 'Hellbilly Deluxe: 13 Tales of Cadaverous Cavorting Inside the Spookshow International,' in 1998.

"Nothing's worse than when I've gone to see bands and they're like [puts on enthusiastic tone], 'We're going to play our entire new album from start to finish.' [Spoken through gritted teeth] 'Terrific. Thanks, douche-bags,'" Zombie laughs.

Other songs that people will have to be content with the recording? "We'll never play 'The Man Who Laughs' live, ever. We'll never play 'Burn,' ever," he says. 'Burn' was released on the video game 'Rock Band' in late October, but that's no incentive for Zombie to change his mind. "I don't like song that much," he laughs.

The song is probably the most straightforward on an album that is concoction of all things hard, intense and aggressive with subtle touches of everything from howling winds to full orchestras, tolling bells and vocal samples. "The label's like, 'That's the single.' I'm like, 'I'm not that keen on that song.'

"We were playing 'Werewold Women of the SS ' live for a while, but because the record wasn't out people seemed to be getting weird-ed out [laughs]. So we stopped playing it."

The band -- Zombie, guitarist John 5, bassist Piggy D, drummer Tommy Clufetos -- has been rehearsing 'Werewolf, Baby!' Zombie says, as well as 'Mars Needs Women,' which is almost a pop song with its acoustic instrumental intro for the first minute and a half, then anthemic singalong lyrics "mars needs women/angry red women."

"That's fun to play," says Zombie. "That one's for the ladies. Just kidding."