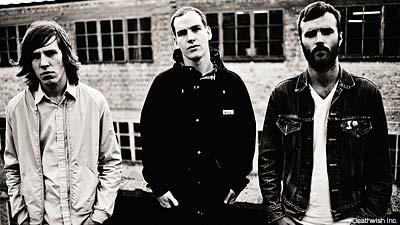 Sinister hardcore isn't the first thing that comes to mind when you think of Belgium, but don't tell that to Bjorn Dossche. The singer fronts Rise and Fall, a four-piece annihilation machine that has just released a contender for hardcore album of the year. 'Our Circle Is Vicious' is a brooding, violent and thrilling piece of work that was produced by Converge's Kurt Ballou. Fans of Integrity and older Neurosis should pay attention to these Europeans.

Noisecreep spoke with Dossche about growing up a hardcore and metal fan in Belgium.

Being from Belgium, what was your first exposure to hardcore? Did you get into metal or punk first?

I got into metal at a really young age. I remember getting a dubbed copy of AC/DC's 'The Razor's Edge' on cassette off of my nephew. I must have been 11 or 12 years old at that time. After that I gradually got into heavier bands, obviously Metallica and then Judas Priest, Slayer, Megadeth and what have you. When I was 14 years old, I picked up Sick of It All's 'Just Look Around' album on a whim, and that record totally blew me away. I loved how intense and angry it was, it was heavy but in a different way than all the metal I'd been banging my young head to. From there on I started picking up more and more hardcore records, getting deeper and deeper into the whole thing. However, I've always been someone with a pretty wide taste so while I love hardcore, there's so much more music out there that inspires me and gets me excited.

Was it tough finding other people in your town that shared the same influences?

Not really. We are all from different parts of the country, but since Belgium is so small that might not matter much anyway. Rise and Fall originally started with a totally different lineup than the one we have now, and in the early days Vince and me would drive close to two hours every week to practice with the other dudes. However, since early 2004, when Cedric joined the band, most of us have always been located in the lovely city of Ghent, which makes things easier obviously. It took a while for everything to fall into place lineup-wise, because even though there are a lot of hardcore and metal bands and musicians out here, not everyone is willing to go all the way and sacrifice so much time and effort to doing a band like Rise and Fall.

Listening to Rise and Fall, one could hear the Integrity influence. How important is that band to you? We know Dwid (the singer) left Cleveland and lives there now.

We all love Integrity and speaking for myself, records like 'Those Who Fear Tomorrow,' 'Systems Overload' and 'Humanity Is the Devil' made a huge impression on me while growing up. The way they pioneered the merge of hardcore fury and energy with dark and eerie metal and other influences remains impressive to this day and I'll be the first to say they were a big influence on our first two albums. Plus we recorded 'Kingdom of Heaven' for an Integrity tribute album a few years ago and played that song live for a while too. With the new album I think we have kinda moved away from that sound. Although the influence is still there, it might be less obvious and under the surface. Dwid does indeed live in the same city we live in, and we see him from time to time. He actually put out our bass player Vince's other band Blind to Faith on his label, Holy Terror Records.

Politically speaking, how has the political climate in Belgium been in the last decade or so? Did that inform any of the band's songwriting efforts?

Belgium is a pretty confusing country politically. Our situation is pretty complex, and it's not all that easy to explain to foreigners how things work here. Hell, half the time I don't even understand it myself. Basically we have a national government that governs the whole country but then each region has its own government as well. So if you know we have a French speaking, a Dutch speaking and a German speaking region, that all adds up. Plus our capital Brussels is bi-lingual, so they have their own government there, too. There are people on both the Dutch and the French speaking sides who would rather see their own regions as independent countries, and all that has been causing problems for longer than I can remember. However, those are minorities and most people really couldn't care less. I mean Belgium's small enough as it is, so what's the use of splitting it in two or three? Our political situation hardly influences our lyrics or songs though. We are not that kind of band.

Touring the States and other territories, what are some misconceptions people have about your country?

In Europe, a lot of people have the impression that everyone from Flanders (the Dutch speaking part) wants to split the country in half, which is far from true like I said. We are from that part of the country, so it gets tiring sometimes having to explain how things really are. Americans usually don't really know where exactly Belgium is, and sometimes they assume we speak German, or only French. Most people aren't all that schooled on European geography, which is understandable, since Europe's quite big and there's so many different countries, languages and cultures all in one continent.