For nearly a decade now, Poison drummer Rikki Rockett has been constructing custom drum kits for a wide variety of clients ranging from legends to up and comers. His company, Rockett Drum Works, is dedicated to crafting drums that are 100% American-made.

Not long ago, a television producer friend of Rockett's, after witnessing life within the drum factory, told him he thought that it would make a terrific reality show.

Today, Rockett and his people are out pitching the pilot for his reality show American Drums. Noisecreep had the pleasure of speaking with the drummer about where he thinks the show fits within the insane world of reality television.

Rikki, what is the status on American Drums?

Well, right now, we have a couple of different, what are called sizzle reels, that we are in the process of pitching. These are like demo versions of the show. We're working with Triage Entertainment who are an awesome company and totally understand what we're trying to do.

This all came about when my friend Dan Masek from the E! channel spend some time with us watching us build drums. He told me, 'People would love to be a fly on the wall for all of this. To experience you, your team of builders in your customers is something people really need to see.' I told him great, I just didn't want to do anything that wasn't real. I didn't want to stage things. We are what we are and that's why want the show to be.

What makes the environment and your company so unique?

I think what's most interesting is that we are a truly custom shop. Our customers run the gamut from guys like Stephen Adler to a doctor in Ohio. It's all over the map. Designing and building drum sets for somebody is a really important mission because it defines so much of who when what they are on stage. To me, drums of the most important thing up there so we work harder than anybody to make sure our customer gets a custom set that really is tailored to their personality. 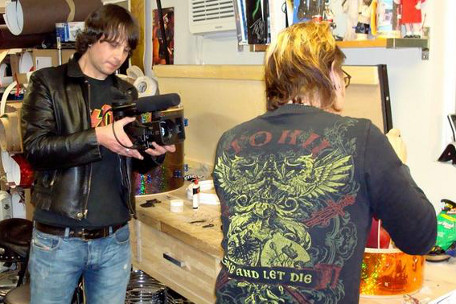 Successful reality shows obviously happen because of the personalities involved. What is your crew like?

Well as it turns out, my crew is pretty over-the-top. They work for me not because of that. but because they are the best ones to build these drums. But the fact that they have amazing personalities and lots of character I think makes our show truly special. They're just an awesome bunch. Another thing that I think makes our show really special is the thing that makes our company special: Everything we do is 100% American. All the sourcing, all the parts; that's a very important aspect of this. America created the drum kit I think it's time we reclaim that and remind people that this is where it all started.

What are your favorite reality shows?

Oddly enough I don't watch too many reality shows. I'm kind of a documentary freak. That said, I think American Chopper is just great. When you see guys that are able to create something right in front of someone, that's really special. I like "build" shows like that and I love motorcycles so of course anything bike-related I'm a fan of.But here's the thing, the way I look at our show is that it's not so much about drums as it is about music. In each of our episodes you to meet all kinds of musicians from punks to rockers to country players. Their worlds are all so different and every episode will give you glimpses into what it's like for these musicians. I just think musicians as such interesting people and now you have a chance to see a lot of them in a totally unique light as we work with them to build the custom set of their dreams. It's a really crazy world in there. And I think people are going to love this show.

How does this all coexist with your work as the drummer in Poison?

Well, we don't tour nearly as much as we used to, only about three or four months a year, so it's not really a problem at all. Obviously if things got really busy then that would be the kind of problem that you want; too many cool things to work on. But if that were the case I'd simply hitch a trailer to the band bus and then just build drums out of the trailer while the guys kept working back at the shop. When there's a will there's a way!

Head to www.RockettDrumWorks.com for more information on Rikki's custom drums.