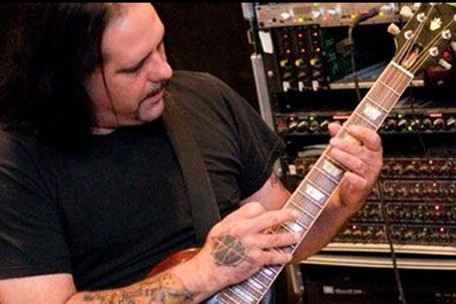 Rigor Mortis and Ministry guitarist Mike Scaccia collapsed on stage and died during a Rigor Mortis performance in Fort Worth, Texas, on Saturday night (Dec. 22).

The 47-year-old veteran guitarist was performing with the band, which he formed back in 1983, as part of a 50th birthday celebration for singer Bruce Corbitt, when he reportedly fell into a seizure and was rushed to the hospital, where he was pronounced dead. Scaccia's cause of death was listed as a sudden heart attack.

"My brother is gone! The only reason I am who I am is because of this man. If it wasn't for him I wouldn't even be in a band. RIP Mike -- the greatest guitar player I ever knew," Corbitt, who organized the event, wrote on Facebook. "I'm proud to say that I was always Mike Scaccia's biggest fan, and always will be."

Scaccia played on Ministry's Grammy-nominated 1992 album Psalm 69, and continued to play with the band and it's many offshoots, including Revolting Cocks, Buck Satan, Lard and the 666 Shooters. He recently appeared on Ministry's 2012 release, Relapse.

"I just lost my lil' brother and my best friend -- the 13th Planet compound is devastated, completely in shock and shattered," Ministry frontman Al Jourgensen wrote in a Facebook tribute. "Mikey was not only the best guitar player in the history of music, but he was a close, close, close part of our family -- and I just lost a huge chunk of my heart today. Our lives are forever changed. Life without Mikey is like orange juice without pulp – kind of bland. I have no words to express what this guy meant to me, my family, my career ... Everything!"