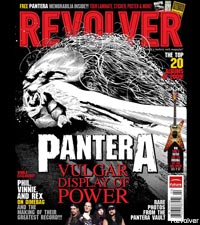 Revolver, touted as the 'world's loudest rock magazine,' marked the fifth anniversary of the passing of Pantera's Dimebag Darrell with their exclusive, 12-page oral history/cover story, which takes an in-depth look at the band's landmark album, 'Vulgar Display of Power.' The issue -- which is the first time drummer Vinnie Paul and frontman Phil Anselmo, who have somewhat of an acrimonious relationship, have appeared together (yet separately) in the media since the 'Behind the Music' special -- hits stands on Dec. 22.

"I'd been thinking about how Revolver would go about memorializing Dimebag Darrell five years after his death for a while," Revolver editor-in-chief Brandon Geist told Noisecreep. "There was one thing I knew I wanted to do: I wanted to push past all the tragedy and negativity that ultimately consumed Pantera and truly celebrate Dime and his band as we all want to remember them. And that's when it dawned on me that the way to go about doing this was to tell the story of Pantera's greatest album, 'Vulgar Display of Power' and thereby capture Dime, as well as Phil, Vinnie, and Rex, at their very best."

Geist's idea was obviously a thoughtful one, but it also presented its own unique challenges. Given the splintering of relationships between the Abbott and Anselmo camps before and after Dime's death, and the animosity between Vinnie Paul and Phil Anselmo, the oral history became a sensitive and arduous endeavor.

"Putting that story together turned out to be a daunting task," he said. "We had to make sure Vinnie was OK with appearing in the article alongside Phil, making this the first piece in which they've both participated since VH1's 'Behind the Music' special on Pantera." And that was no small feat.

Additionally, the story also cracks open some metal urban legends surrounding the album, especially regarding the cover art. Geist said, "We had to track down the photographer who shot the infamous cover photo and the model who took the infamous punch. And in the process, we ended up debunking the legend behind the photo: that a fan took 30 real punches to the face at $10 a punch. And perhaps the biggest challenge of all, we had to come up with an image for our magazine cover that lived up to the greatness of Pantera and the greatness of 'Vulgar.'"

That's where graphic artist Tim Bradstreet came in. "I've been a fan of his work since I was a kid, awestruck by his stark, striking illustrations for 'The Punisher' and 'Vampire: The Masquerade,'" Geist said. "I was actually too intimidated to talk to him at my first comic-book convention. And though I knew he was perfect for the job of re-imagining the cover of 'Vulgar,' I didn't even realize how perfect he was until after we contacted him and he revealed that he's a huge Pantera fan -- and that 'Vulgar' pretty much changed his life when he first heard it in '92.

"Clearly, the stars were aligned. And ultimately, that's how it seemed with the issue as a whole -- as challenging as it was to put together, in the end, everyone we interviewed and worked with was eager to be part of it, eager to pay tribute to Pantera and eager to celebrate Dime in his finest hour." The issue comes with a memorabilia pack, which includes a replica backstage laminate, concert ticket, poster and sticker from 'Vulgar Display of Power.'

You can check out interviews with Dime's friends, during which they recall his youth, experiences touring with him and other events, as well.