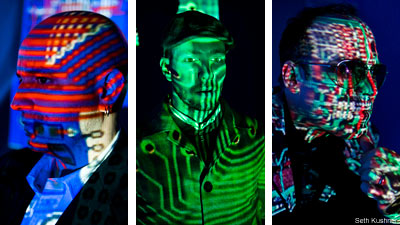 Coheed and Cambria drummer Chris Pennie (ex-Dillinger Escape Plan) has been playing twice as hard this winter. In addition to working on the new album by Coheed and Cambria, 'Year of the Black Rainbow' (out April 13), Pennie has been writing and recording with his other group, Return to Earth.

The band, which also features vocalist Ron Scalzo and guitarist Brett Aveni, will release its second full-length record, 'Automata,' this summer on Metal Blade Records. The album will be the follow-up to their 2007 debut, 'Captains of Industry.'

"After self-releasing our first album, 'Captains of Industry,' and discovering a heavier, more intense sound during the recording sessions for 'Automata,' the three of us agreed that the scope of the band's vision would benefit from the support of a bigger, like-minded record label -- one that had similar musical influences and an appreciation for our DIY 'studio geek' mentality," Scalzo said.

"I have been a big fan of Chris Pennie for a long time, and we all at Metal Blade are very excited to work with Chris and the rest of Return to Earth," said Metal Blade president Brian Slagel.

Influenced by textural and experimental bands such as System of a Down, Faith No More, Tool and Muse, Return to Earth play a striking combination of math metal, alt-rock, classic rock and even industrial.

"We're all passionate about music, and have a shared affinity for classic metal and modern day rock with lush production," Scalzo said. "We're three guys with three different perspectives, but you can hear all those influences in our own tunes, loud and clear."