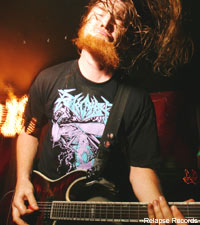 Philadelphia's finest, the diabolical geniuses behind Relapse Records, have partnered up with like-minded souls BrooklynVegan-BBG to present its 2009 CMJ showcase. It's all going down Oct. 23 at Fontana's (105 Eldridge St) during the annual CMJ Music Marathon in New York City. The event will be open to the public as well as CMJ badge-holders.

Featuring a stellar lineup of Relapse bands, friends and free agents, the showcase will be headlined by death metal bruisers Misery Index and feature the slow-motion destroyers in Salome, the technical death/thrash delights of Revocation, the nasty blackened attitude of Black Anvil, the tweaked-out bareknuckle hardcore of Complete Failure, the bottom-heavy Masto-grooves of Howl and the off-the-wall madness that is the Gloominous Doom. Get stoked!

Doors for the Relapse showcase will open at 7 PM ET, but Fontana's will be open earlier for an all-day BrooklynVegan event.

The 2009 Relapse Records CMJ showcase will be also be presented in part by Miller Brewing Company, Hornitos Tequila and Main Drag Music.

Additional information on CMJ can be found at the official CMJ Web site.