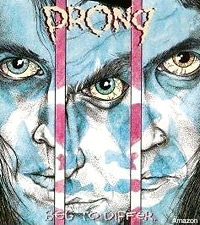 Here at Noisecreep we fight for the underdog. We're cheerleaders for the bands that never get the kind of praise their music demands. For this installment of Rediscovered Steel, we're shining the spotlight on Prong's landmark album, 'Beg to Differ.' Released in March of 1990, before Nirvana threw a wrench in the metal machine, the record sounds as brash and bold today as it did when it first hit stores.

Prong's first two albums, 'Primitive Origins' and 'Force Fed,' found the New York City trio incorporating everything from the raw guitar tones of punk to the rhythmic charge of the burgeoning noise-rock scene. By the time they recorded 'Beg to Differ,' the band had streamlined their sound into a leaner and meaner beast. There wasn't any room for filler and if there was a guitar solo in a song, you better believe it oozed character. The dizzying groove of songs like the title track and "Lost and Found" helped inform the music of platinum selling groups like Pantera and Korn yet Prong have been relegated to mere footnote status.

In this Noisecreep exclusive, Prong's singer-guitarist Tommy Victor candidly talks about 'Beg to Differ' and the bands that helped influence their groundbreaking material.

Looking back, 'Force Fed' was not the kind of album that you would expect a major label like Epic Records really getting. What lead to the deal with them?

For the time, 'Force Fed' could be considered an innovative thrash record. We combined NYC hardcore with grindcore and a style that used to be called "NY Noise." So I guess that's why it created some interest with our original A&R man, Bob Feineigle. He came to see us open for the Cro-Mags at The Ritz in NY and came backstage after the show and said he wanted to sign us. We did another show at CBGB and Bob brought along his bosses and other label people down. It was a totally insane show and I guess it impressed the Epic people because we signed a contract shortly after and the next day, literally, we were in the studio recording 'Beg to Differ.'

When you were writing the material for 'Beg to Differ,' did your A&R guy get involved at all? Did the label try and steer you in a specific direction?

No, not at all actually. A lot of the 'Beg to Differ' material was already written even before we signed with Epic.

You did it a little on the earlier records, but on 'Beg to Differ' you really perfect the whole stop and go riffing thing. Bands like Helmet and Pantera seemed to be paying attention. Do you think Prong gets enough credit for that specific riff style?

No, not really. But we basically got some of that groove metal attitude from the Bad Brains. That's why we did the song "Brainwave" on the 'Prove You Wrong' record as a tribute to them. Ironically the first tour we would do for our next album, 'Cleansing,' would be opening for the Bad Brains. There were a couple of other bands on the NYC hardcore scene experimenting with that sound a bit. We took that but added some dissonance, ala Voivod, to set us apart a bit.

There is also a lot of space and economy in the arrangements. Did that come from the industrial side of your influences? It's obvious that Ted could have played much more showy stuff. The sparseness of your approach was brave considering the time period.

We needed and wanted to be different. All three of us had a background in the whole "NY Noise" scene. Ted was actually one of the drummers for Swans. Ted always stressed the brute force rather than a display of technical proficiency. I always tried to be economic yet tough on the guitar as well. A lot of that was essentially a punk rock attitude. We definitely focused on the rhythm more than the traditional metal virtuosity. So if that could be called industrial, so be it.

The lyrics to the title song are particularly biting. Who was that song directed at?

I guess it was an expression against yuppies, snobs, art farts, pompous a--holes, capitalistic mainstream, etc. It was pretty common back then on the Lower East Side to hate the yuppies. It was a battleground between sides back then. Obviously we lost the war because Manhattan is only for rich people now. It seems like everyone else got pushed out.

How did Pushead get involved with the cover art?

Pushead was THE first guy to review our first record 'Primitive Origins' for Thrasher Magazine. It made sense to eventually get him to do art for an album cover. I had been in correspondence with him for awhile by the time it came to do 'Beg to Differ' so it was easy.

Once the album finally hit stores, MTV played your videos all the time and the press gave you a lot of coverage. What was the feeling within the band about your future?

Actually, they didn't play our videos all the time. We were still secondary to all the hair bands and what not. And we are just talking about Headbanger's Ball essentially. There's no way that Prong got any real attention during the day or regular programming. Eventually the attention was brought to the grunge bands. Prong was left out. Eventually we were snubbed by the thrash metal scene as well. We were always snubbed by somebody. We never walked around feeling like we were a successful part of the music mainstream by any means. We always felt like it was us against the world once we got on a major label.

Why did your bassist and co-writer Mike Kirkland leave the band after 'Beg to Differ' came out?

Looking back, it was kind of an unfortunate deal. Mike was a lot older than Ted and me. We both were brats in a lot of ways. Mike was a great guy and a talented dude. We just stopped communicating. It seems like he didn't like the craziness on the road, and he started to get an attitude. We should have overlooked it and patched it up. Ted an I just felt he was holding us back in a lot of ways. It's too bad.

It was so ahead of its time in so many ways. How do you feel about 'Beg to Differ' when you listen to it now?

I like it a lot. I'm proud of it. Prong is still performing "Lost and Found," "Beg to differ," and "For Dear Life," and I really enjoy doing them. It was a magic record. We just had some beers, and did it. There was little planning and all of that other nonsense that goes into records. We were excited and charged up, and the performances show on the record. Some of the guitar stuff is crazy! I don't know how I did it!