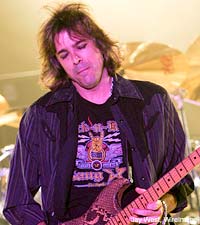 Along with Mötley Crüe and Poison, Ratt were known as the kings of the 1980s Sunset Strip scene. Formed in 1976 by San Diego vocalist Stephen Pearcy under the name Mickey Ratt, the band went through years of working the southern California club circuit. In 1982, the name of the group was shortened to Ratt and Pearcy surrounded himself with what would become the classic band's lineup. The group now featured Warren DeMartini and Robbin Crosby on guitars, Juan Croucier on bass and Bobby Blotzer on drums and two years later they would have one of the biggest rock anthems of the last few decades with 'Round and Round.'

Ratt went on to become arena heroes with multiple hit albums, but they've had their share of heartache in more recent years. In 2001, Crosby admitted to having full-blown AIDS and died the year after from a heroin overdose. Though the band always seemed to be around in one way or another, it started to feel like their best days were way past them. Record deals came and went, and so did the lawsuits from former members.

Now featuring former Quiet Riot guitarist Carlos Cavazo (along with Robbie Crane on bass), Ratt are returning leaner and meaner with their first studio album in 10 years -- and this time they'll be backed by the folks at Loud & Proud/Roadrunner Records. The band has been reminding hard rock fans why they've sold over 15 million albums worldwide all summer on their headlining tour with Extreme. Noisecreep spoke with Warren DeMartini about Ratt's new record deal and how it feels having an old friend from the original Sunset Strip days in the band now.

Ratt has been around for three decades now, and you've had many ups and downs. Does this new deal with Roadrunner Records feel like a new lease on life for the band?

It absolutely does. In a way it reset this whole thing and put us in sync with everything. They are 100 percent behind the band and this upcoming record. Their track record speaks for itself, too. But the most important thing is that they know how to work an album in terms of the current marketplace and all of that stuff. The Roadrunner guys also trusted us and let us record the kind of songs we like to write and stayed out of the way.

Were there ever points in the past where you thought the band was probably over?

It's unusual for a band to last this long these days. So I look at it like every year is a surprise (laughter), but the fact that all of this stuff is happening for the band right now just makes it all the more exciting.

Noisecreep was at your recent show in Los Angeles, and we haven't seen the band look so happy on stage since the late '80s.

Everything about that show just clicked. Sometimes hometown gigs can be tough with all of the guest list drama and things like that. But this time it all ran smoothly. The show was at The Wiltern, which is a place I drive by all the time when I'm home, and it always brings back memories because Ratt signed it's first contract with Atlantic Records a few miles from there way back in the early '80s. I guess you can say that we came full circle that night.

You have Carlos Cavazo playing guitars in the band now. Were you guys friends from the old Sunset Strip days?

Having Carlos playing guitar with me is like an event every night for me. It's still surreal. I'll be on stage and look over to my right and it's Carlos (laughter)! We know each other from the old Sunset Strip days, and when the spot in Ratt opened up he was the guy I thought of for it. Some years back, I was at a club and I ran into Vinnie Appice [of Heaven and Hell and Dio], and I got Carlos' number from him. I put it into my cell phone but didn't call him. Two years later, I look in my phone and his number is still there, so it might have been fate (laughter). We're having a great time on stage together night after night.

Who is producing this new album, and what can fans expect from it in terms of its style? Do you have an album title or anything else you can reveal?

I'm not really allowed to reveal the album title right now unfortunately, but Michael 'Elvis' Baskette is the producer who has worked with a lot of big current acts. All I could say about the songs on the album is that they are straight-up Ratt songs, and our old-school fans will definitely like what they hear.