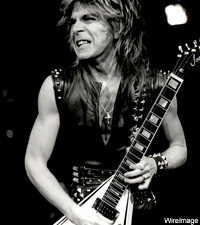 A museum dedicated solely to the memory of late Ozzy Osbourne guitarist Randy Rhoads is set to open sometime this year in Corona, Calif. The location was chosen due to its proximity to Rhoads' grave site. Rhoads, who was also a member of Quiet Riot, was Osbourne's lead guitarist from 1979 until his death and is largely considered the former Black Sabbath frontman's quintessential axe.

His polka-dotted Flying V guitar was his signature and is on display at the Rock and Roll Hall of Fame. He was killed in a plane crash in 1982, after the plane he was traveling in struck his boss' tour bus and subsequently crashed. He was just 25.

Rhoads' brother Kelle Rhoads and Quiet Riot bassist Kelly Garni recorded an announcement via YouTube about the museum. It was also recently announced that Rhoads biography, 'You Can't Kill Rock 'n' Roll,' will be penned by Garni, along with editor/screenwriter Michael Lynn. The book is slated to be the most comprehensive look there ever has been of Rhoads.

Photographer Jan Banbury, who captured the image of Rhoads that will grace the cover, has said, "I've personally read numerous chapters from the book, and I can honestly [say] that this is the book we've all been waiting for. No rehashed guitar magazine articles or fluff story."