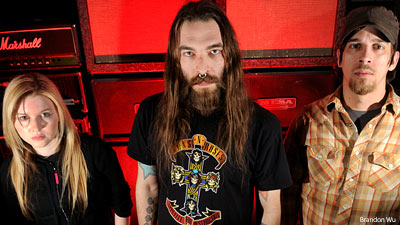 After releasing fantastic records from Amesoeurs, Cobalt and Krallice, not to mention hosting the return of the mighty YOB, Canadian boutique label Profound Lore has added another fine act to its roster in Virginia doom/sludge trio Salome. The band features Kat, who also does time in Agorophobic Nosebleed, on vocals, backed up by drummer Aaron Deal and guitarist Rob Moore. The riffs are inventive and crushing, and the band's sound is much more massive than a band with only two instrumentalists has any right being.

"We couldn't be more excited about working with Profound Lore for our next record," Deal confessed to Noisecreep. "I really appreciate the strength and diversity of the Profound Lore lineup, and it's great to be among so many bands that we really love like YOB, Bloody Panda, Cobalt, Agolloch, Amesoeurs and others. We're really looking forward to our upcoming tour with Hull and Batillus and then getting to the studio to work on [our debut full-length for Profound Lore]. Get ready to be devastated."

The album is expected "to drop sometime first half of 2010," according to Profound Lore's website, but in the meantime you can get your fix by picking up Salome's split with the equally-heavy Thou, out in September via Germany's Vendetta Records.