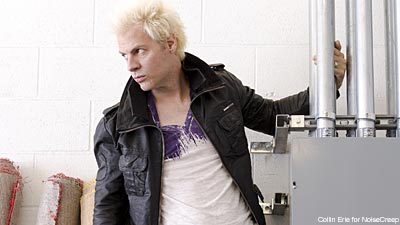 Powerman 5000's Spider One may have written a song about vampires, but it was penned much earlier than the current craze about the blood-sucking creatures.

"I wrote 'V is for Vampire' right before that weird 'Twilight' explosion, before every teenybopper was gaga over vampires," Spider One says in our exclusive video interview. "I'm getting a lot of flack for it. People are like, 'Cool song but what are you? A 'Twilight' fan?' To be honest with you, if the legion of 13-year-old 'Twilight' fans follow us and decide that they like Powerman because of that, that's fine with me."

Also in the video, Spider One touches on his idea of underrated horror films, an oxymoron he said, because all movies in that genre are underrated.


"I'll tell you what I like that I think unfortunately more modern audiences may look at and laugh about," Spider One said. "I usually like older films, those sorts of Cold War horror/sci-fi things, like 'Them' with the giant ants. Even though you can continually look at those things and laugh, because the effects are less than stellar -- to me, there's something much more authentic and creepy and real about those than a lot of [CGI-heavy films].

"I'm also drawn toward movies that aren't necessarily classified as horror movies but are actually quite disturbing and scary. Not long ago, somebody referenced 'No Country for Old Men' as a horror movie. 'Well that's a strange thing to say.' But it really is true. That evil character in that movie is just as menacing as Freddy or Jason. I think looking at horror with a slightly different attitude is necessary to really find the good stuff."

Originally formed in 1991, PM5K has been led from the beginning by Spider (who also goes by the nom de plum "Spider One"). In the process, the group has built a large and loyal fan base, on the strength of such hit albums as 'Tonight the Stars Revolt!' and 'Transform' (both of which landed inside the top 30 of the Billboard 200 album charts), as well as the radio favorites 'Supernova Goes Pop,' 'Nobody's Real' and 'When Worlds Collide.' 'Somewhere on the Other Side of Nowhere,' Powerman 5000's first album in three years, hit stores Oct. 6 on Mighty Loud!/Fontana Records. It features the song 'V is for Vampire.'