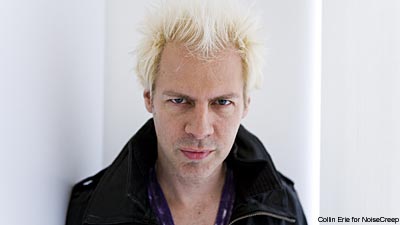 Powerman 5000's Spider has mixed feelings about the name of his forthcoming album, 'Somewhere on the Other Side of Nowhere.' "[The album's title], depending on your mood, is the dumbest album title ever or the grandest, most profound thing I've ever said in my life," he tells Noisecreep in this exclusive video interview.

Originally formed in 1991, PM5K has been led from the beginning by Spider (who also goes by the nom de plum 'Spider One'). In the process, the group has built a large and loyal fan base on the strength of such hit albums as 'Tonight the Stars Revolt!' and 'Transform' (both of which landed inside the top 30 of The Billboard 200 album charts), as well as the radio favorites 'Supernova Goes Pop,' 'Nobody's Real' and 'When Worlds Collide.' 'Somewhere on the Other Side of Nowhere,' Powerman 5000's first album in three years, hit stores Oct. 6 on Mighty Loud!/Fontana Records.