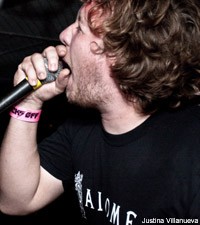 There is no set formula to creating grind and Pig Destroyer have proved there is no need for rules. All members have day jobs, preventing them from exercising heavy touring schedules. Yet, the band wisely selects enough shows to play to continue a healthy presence around the world (yes, they play international shows).

With a Washington Post article that depicted extreme metal for the non-metalheads of America through Pig Destroyer, they also have become grindcore's poster boys. So when the band played just before Eyehategod as part of the Rocks Off Concert Cruise series, it became even more evident that the band is no longer just another grind band from Virginia.

"This is art!" roared throughout The Temptress Oct. 24. A mix of a sample and fans voices howled the last line to 'Prowler in the Yard''s intro 'Jennifer.' The nearly minute-and-a-half-long track has become a staple moment of the band's set.

"Play something heavy," someone sarcastically yelled. Though the band played a short set, the passion went a long way. I'm sure the explosion of moshers and crowd surfers climbing to the second level had something to do with it.

If you missed the boat show but want to reenact Pig Destroyer's set in your bedroom, here's some cool news: from now through Oct. 31, you can buy all the band's CDs for $6 through Relapse Mailorder.