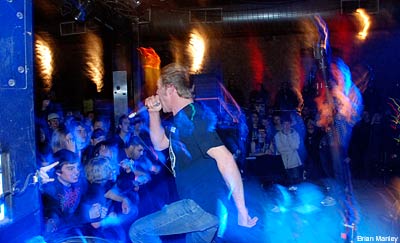 Pig Destroyer do not tour. They just don't. So when they do take to the stage, their inclusion on a bill is treated like images of the mother of Christ on toast -- even the faithful have their doubts. "Are they really playing?" is what was heard from mouths all around before a member of the band or merch was spotted at The Masquerade on Dec. 11.

People cross state lines and appear from the woodwork to take in Pig Destroyer's noise and grind, which is why the band was greeted by curdling screams that seemed miles from the normal 'entertain me' demands most crowds give. The sounds changed to worry in a matter of 30 seconds when the band stopped after their first riff. 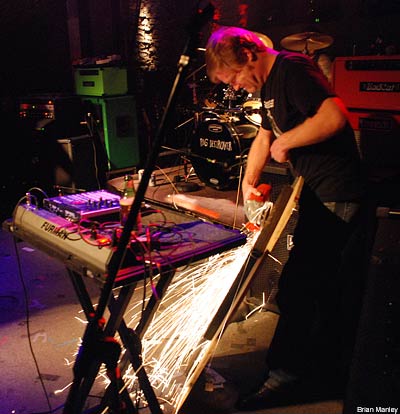 "This happened last time," guitarist Scott Hull said as he inspected his cables. The last time Pig Destroyer came to Atlanta was to perform on the main stage at the Scion Rock Fest back in February, and that set was plagued with the same technical issue. Many left that set disappointed and wondering what the hype was about -- including this writer. Many worried that this set would once again have the same result -- this Noisecreep writer watched with a 'this glass has been stolen' attitude.

"Let's pretend this is a very ugly sound check," singer J. R. Hayes told the crowd. "We apologize, but we are walking technical difficulties." Hull continued to work on cables and his amp as Hayes walked to the back shadow of the stage to sit, sulk and pour beers on his head one after the other.

After 10 minutes, all mysterious problems had been resolved and the violent thrust of the songs began with little stops as fans applauded the band through pummeling each other. One fan rubbed the sides of a speaker to the churning drum beats like the woofer was soon to give a sexual satisfaction. And Blake Harrison, the man behind Pig Destroyer's electronics and samples, amped the crowd up by meeting each of their fists and screams and ran an electric saw over metal pipes for effects of noise and sparks.

Déjà vu had been avoided, this Pig Destroyer was nothing like the last one Atlanta saw. This was the one is worthy of adoration and devotion.