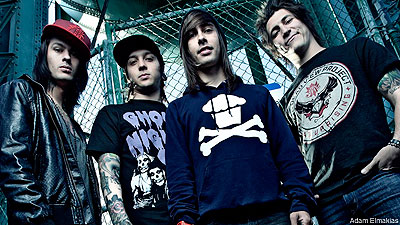 Pierce the Veil are pulling back the curtain with this exclusive clip from the making of of their new album, 'Selfish Machines,' due out via Equal Vision on June 21, a day before the normal Tuesday release date. The deluxe edition of the album features the full DVD of the making of, as well as bonus cuts and two, two-and-a-half-inch vinyl figurines based on two character on the album art. Watch the clip now!

"We had a lot of fun making 'Selfish Machines,' as you can see in the DVD clips, haha," said vocalist/guitarist Vic Fuentes. "The one thing that kept us on track was thinking about our fans and playing shows again. We have been waiting three long years to release this album and it's finally here! 'Selfish Machines' is about taking what you want and feeling no regret for the things that make you happy."


As for the toys that come as extra with the deluxe edition? Fuentes said, "We wanted the deluxe edition of our new album to be something special and different for our fans, so we included two vinyl toy figurines of the boy and the girl from the cover art!"

Download Pierce the Veil Songs
Filed Under: pierce the veil, PierceTheVeil
Categories: Interviews
Comments
Leave A Comment
Back To Top