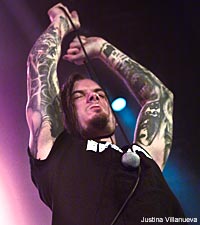 Down have come a long way from being a Pantera side project with a history that has provided for a full documentary on the band. Hundreds of fans wearing black shirts with white Down logos came from all directions around Times Square -- where the venue was located -- in support of the Anselmo-led team.

Known for drastically long rants that usually span over 20 minutes, ex-Pantera vocalist Anselmo has grown up. He respected the venue's curfew by keeping his between-song banter short and acknowledged that the fans were there to see the Southern boys do what they do best: rock out Southern metal style.

With a set list that spanned three albums, an encore was still expected of the band. The crowd repeatedly shouted "U.S.A., U.S.A., U.S.A." until the supergroup returned to the stage. After a quick smoke break, they came back with a cover of Van Halen's 'Ain't Talkin' 'Bout Love.'

While the band's fourth album will be delayed until bassist Rex Brown can recover from his recent acute pancreatitis diagnosis, you can expect the release of 'Down -- Diary of a Mad Band' in 2010. The documentary includes footage from the band's first European tour and a sneak peek of it will be showcased at the Kronk Festival in Pontiac, Mich. on Sept. 20.

Down Tour Dates
on TourTracker.com