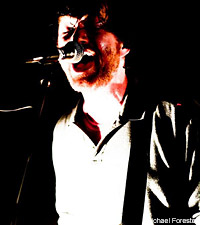 Over the span of four albums, as well as various EPs and splits, Pelican have established themselves as the forerunner of instrumental metal bands, but longtime fans will be surprised to hear vocals -- gasp! -- on their latest record, 'What We All Come to Need.' Though they appear on only one track ('Final Breath,' the album's closer), it is still a bit of a departure coming from a band that has thus far shunned any sort of oral instrumentation.

So, who has the honor of being Pelican's vocalist? None other than Mr. Allen Epley, who has made a name for himself fronting indie rock favorites the Life and Times, as well as his previous band Shiner (which also featured Every Time I Die bassist Josh Newton on guitar). Noisecreep caught up with Epley to talk about his involvement with Pelican.

Have you always been a fan of Pelican?

Yeah ever since I first heard them, around 'Australasia.' I thought they sounded like Hum without vocals, but slower ... and heavier. But I've always been intrigued with how it's often kind of major key heavy, not always so brooding and dark, like so many other bands in their genre.

How did it go down that you ended up singing on 'Final Breath?'

They asked the Life and Times to go on tour with them and Mono a couple of years ago for the 'Fire in Our Throats ...' record. We bro'd down pretty hard on that tour and became lifelong bros. Apparently those bros like this bro's voice. I am honored and humbled to be included in any way on a Pelican record, but to be the first to sing on such an influential instrumental bands' record is a big deal for me.

Did the Pelican guys have a pretty rigid idea of what they wanted vocally or were you more or less free to do whatever you wanted?

Totally free to do whatever. But I'm also sure that if they hadn't been completely into whatever I came up with, they would have left themselves an escape clause. Initially I think it was supposed to be a hidden track, but apparently they got rocked by what I did and decided to make it a more prominent part of the disc. The first recording I got from them of was literally a single guitar part -- written and played by bassist Bryan Herweg, in his bedroom or something -- and there was no drum or even click track with it. I was guessing where the "one" was the whole time. Then I got another copy with drums and that helped, then they sent a version that's a lot like the one on the record and that's the one it really came together on. But if my part had sucked, they didn't necessarily have to include it and would've broken it to me softly, I'm certain.

The liner notes say that 'Final Breath' was inspired by the poem 'A Red Red Rose' by Robert Burns. I assume they mean lyrically. Was that your idea?

Yeah, it was my idea. Writing lyrics is like pulling teeth for me even with my own songs, so I thought I'd try something different with this. It's from my days in my father's concert choir in college. We sang a few different pieces with this same text. It's from like 1796 but still is totally relevant and real. I'd always loved the text in choir, but in this context it takes on a real desperation. It's an amazing love song, but with Pelican it carries a lot more heavy, anxious weight.

You recorded it in one take, right?

Not exactly, because there are several layers of harmonies there. But it did come together in one sitting over an afternoon at my studio. Sometimes you're not sure with something you make. Then you come back a day or two later and see what you think, and if it passes the sniff test, and it did, then it's cool. I played it for a couple of my bros before I sent it off to Pelican and they dug it, so I said 'Que Sera Sera' and put that sucka in the mail.

What's going on with the Life and Times now? You just finished a tour, what's next?

Yeah just got off a big tour with the Get Up Kids, which was strange and amazing. Who knew those f---ers were so huge?! They had 1,000 kids in theaters screaming their balls off every night. I was blown away. We're still officially supporting our last record on Arena Rock called 'Tragic Boogie,' beginning to write some new jams but it's more difficult since we all live in different cities these days. I'm sure we'll do another tour in spring with U2 or the Boss or Black Eyed Peas ... or Pelly!

Filed Under: black eyed peas, BlackEyedPeas, Every Time I Die, EveryTimeIDie, Get Up Kids, GetUpKids, Hum, life and time, LifeAndTime, mono, pelican, shiner, u2
Categories: News
Comments
Leave A Comment
Back To Top