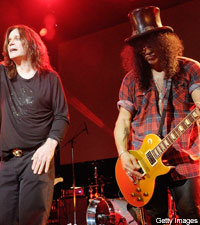 As we previously told you, Slash got together some of his buddies to benefit a good cause, the Los Angeles Youth Network, for a benefit gig in L.A. Well, the show took place Nov. 22, and as host George Lopez said, "No disrespect to the AMAs," referring to the 'American Music Awards' also going on in Downtown L.A., "But this is where you want to be."

If you were a rock fan, then hell yes, this was the show you wanted to be at. You could tell that just from the band, which rivals any supergroup going these days. How about Travis Barker on drums, Jane's Addiction's Chris Chaney on bass and a two-guitar attack featuring Slash and Dave Navarro. Yeah, and for vocals, mix in a little bit of Perry Farrell, some Chester Bennington, Wolfmother's Andrew Stockdale, Billy Idol and -- oh yeah -- Ozzy Osbourne to close out the night. We'll match that supergroup up with anybody and they showed why.

The night offered a ridiculous amount of 'holy s---' moments, starting with the group and singer Franky Perez rocking out some Led Zeppelin covers, including 'Whole Lotta Love,' that really wet the appetite. And that appetite got satiated a bit later for one of the truly great moments of the night when, with Bennington fronting and Duff McKagan on bass, surprise guest Steven Adler took over Barker's drum seat for a rocking 'Paradise City.' So even though it was only 60 percent of the original band everybody wants to see, it was still freaking awesome. And backed by a familiar rhythm section, Slash let loose on that six-string, bringing back some serious flashbacks to the late '80s.

Hard act to follow, but for L.A. music fans, Farrell created some serious magic as he fronted a hybrid of Jane's and Guns 'N Roses, as he said, "We got some of the best bands from L.A. ever up here," throwing in Rage Against the Machine, represented by Tom Morello, who for all of the great bands he's played with, told Noisecreep before the show, "There's really no crystal ball I could've looked into when I moved here in 1986 that I would be rocking with some of the Jane's Addiction and Guns 'N' Roses guys as peers. That's the trippiest thing I can imagine."

And it was beautifully trippy to see the combination bringing even more muscle to Jane's 'Mountain Song,' then turning the Rolling Stones' 'Sympathy for the Devil' into a classic 2009 version with dance undertones and vicious guitar work by the L.A. trifecta. The set closed with a stirring 'Jane Says.'

There were those moments all night. Another came when Stockdale and Slash presented a long-awaited preview of the guitar icon's upcoming solo album. Stockdale, who is one of several guests on the album, recreated his vocals on 'Die by the Sword,' a straight-ahead rock song that if it's indicative of the rest of the album, Slash fans will be very freaking happy indeed. Before the show Stockdale, who admitted playing with Slash "is intimidating, though he's the most easy-going, accomodating guy," said playing the new song inspired him. "I think when you've written a song with somebody you put a bit more heart into it as well." And indeed they killed it, but the all-star version of Wolfmother's 'Woman' also sounded pretty awesome.

As did Ozzy Osbourne, basking in his role as the godfather of metal. A smiling, energetic Prince of Darkness ripped through both Sabbath chestnuts like 'Iron Man' and solo standards such as 'Crazy Train' and 'I Don't Know.' It capped off a magic evening that was, and let's not forget for the kids.

And none of the artist forgot that. Before the show Morello told Noisecreep of kids being homeless, "It's not just a tragedy, it's a crime." And Navarro admitted that getting to meet some of the LAYN kids at soundcheck he got "choked up. It was pretty special this afternoon," he said. "We brought the kids in and to watch their expressions and see how happy it made them and into the music they were was really special."