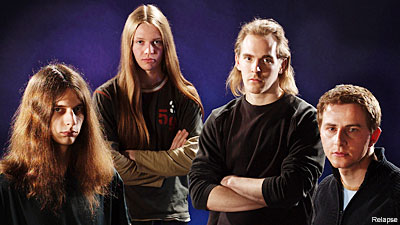 TIME TO SLAUGHTER: The metal masses have much to look forward to this summer as the line-up for the 2009 Summer Slaughter tour was released just a few days ago. Relapse Records' Necrophagist will be sharing the headlining spot with Nuclear Blast's Suffocation. Plus a myriad of support for the tour will also include Ensiferum, Darkest Hour, Winds Of Plague, Dying Fetus, Born Of Osiris, Origin, Beneath The Massacre, After The Burial, Decrepit Birth, and Blackguard. Will they be playing in a city near you? We're not quite sure just yet as tourdates have yet to be announced, but continue to check back on Noisecreep for continuing updates as it develops.

FRANCE INVADES THE US: As well we've also received word that Prosthetic Records' Gojira will be gearing up in early May for a headlining tour with The Chariot and Car Bomb. Starting in Springfield, Virginia on May 1st, the tour will run until the end of the month making its final stop in Hollywood, California on May 24th.

STICKING TO THEIR GUNS: And the hits just keep on coming! Metal Blade Records recently announced that the label's latest superstars will be sharing the stage in venues across the U.S. for the upcoming Metal Blade 'Young Guns' tour. Artists on the bill include Molotov Solution, Woe Of Tyrants, Rose Funeral and headliners Psyopus. Metal Blade's head honcho Brian Slagel comments, "We are very excited to get our cool new bands all on the road together for a great price. We hope that everyone comes out to support the bands and check out the latest in metal."