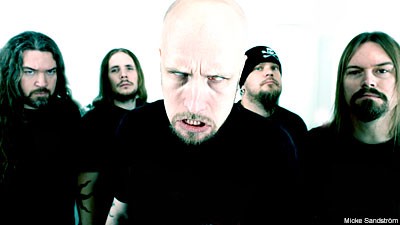 PAIN IN THE BACK: In recent news, Sweden's Meshuggah have announced that the band will be cancelling their upcoming Sandinavian shows. With a herniated disc in his lower back, drummer Tomas Haake along with bandmates are focused on his recovery to look ahead for the upcoming summer festivals and tours.

HEADING SOUTH: Beginning in May, Caliban will be making their way down to South America for three show dates in support of their forthcoming release on Century Media Records titled 'Say Hello To Tragedy.' The release is slated for this month so stay tuned. Watch their video for 'I Will Never Let You Down' after the jump.

BREAK THE ICE: Sitting out a couple of dates on their current tour, Warbringer's Nic Ritter will not be handling drum duties on the account of slipping on ice and breaking his elbow. As he heals, guitarist Adam Caroll will fill in followed by Epicurean's John Gensmer who will take on double duty. The band said in a statement, "Unfortunately this is not an April's Fools joke. Nic fell down the other night loading out of the club and hurt his elbow. We hoped with some ice and rest it would be okay. This morning we found out it was broken. Regardless, the shows must go on and we rehearsed as a 4-piece with Adam playing drums. This will be the format for the next handful of shows until we hook up with Epicurean, as John Gensmer has agreed to play both sets. We toured together on Overkill and he is a beast. Nic will be out of commission for at least 3 weeks, but will be staying on the road with the band."