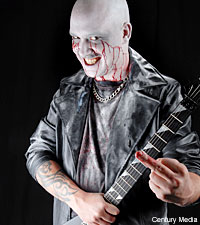 Dimmu Borgir guitarist Galder has resurrected his side project, Old Man's Child, and recorded a new album, the band's seventh, entitled 'Slaves Of The World.' Available on Century Media Records, the follow up to 2005's Vermin is being touted as Galder's "darkest and most hateful album to date."

When asked about the title, 'Slaves Of The World,' Galder told Noisecreep, "It's a title that goes very well along the lines of previous Old Man's Child titles (In Defiance Of Existence, Revelation 666: The Curse Of Damnation, Ill-Natured Spiritual Invasion, etc.). The theme of OMC hasn't exactly had a positive view on the world, as we know it today. So that's the main idea, but it's also a 'point of view' so to speak about today's life and how we are slaves of modern society and evolution. If we forget our mobile phone at home, we almost feel 'helpless' if you know what I mean. We have sort of forgotten the main elements of living, which is in the long run, in my crazy head at least, living in harmony with nature and the elements around us."

"So all in all, even though technology is great, and I like technology, don't get me wrong," clarifies Galder. "It's just a point of view and a 'question' sort of; if the way humans live today is the best solution in the long run for everyone and everything? And just to mention, it doesn't really have anything to do with the song ('Slaves Of The World') itself. It's just a title I found good at representing the whole theme in general for the album."