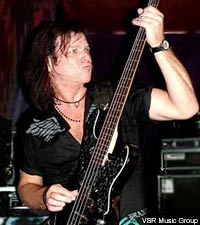 The last few years have been a roller coaster ride for rock bassist Chuck Wright. A member of Quiet Riot, Wright mourned the loss of his 26-year friend Kevin DuBrow, and this year he is celebrating the birth of Northern Light Orchestra and their CD 'Spirit of Christmas.'

"It was his concept to do the story of Christmas based on Biblical accounts," Wright said. "He got together with Ken Mary the producer and put it all together. There's so many guest musicians. In fact, Ken asked me, 'Do you have any people who would be interested in doing this?'" Wright told Noisecreep. "So I got in touch with some of my friends. I was working on a project with Shane Gibson of Korn. He's an amazing guitar player. You have no idea how great he is. Anyway, I got him involved in it. Robin McAuley, who's now with Survivor, I got him involved in it. One of my closest friends, Lanny Cordola, who was also in House of Lords with me and Ken, did a lot of the arranging on the songs that the creator of this thing, Brian Stewart, brought forth."

Some of the artists recorded their bits in Mary's Phoenix studio, while others were shipped tracks and laid down their parts in their own studio. Wright headed to Phoenix to record his bass lines. "[Mary] wanted to keep it in the spirit of melodic rock type of shredding and players," Wright said. "The couple people I thought would be good like Doug Aldrich, Bruce Kulick and Bill Leverty of Firehouse I thought would be good."

Recently, the orchestra performed in a laser light high definition, one-hour live concert featuring many of the performers from the 'Spirit of Christmas' recording. This one-hour Christmas special is set to air on broadcast and satellite television including JCTV, Cornerstone TV, Daystar Network, TCT and NRB Networks with potential airings on PBS affiliates as well. According to Wright, this year, 500,000 sampler discs are being sent out and will be distributed free of charge at gas/convenience stores. Free autographed guitars, T-shirts and drum heads will also be awarded by many mainstream syndicated rock shows. In July 2009, more than 25,000 sampler discs were distributed free of charge at Rocklahoma and 15,000 at NASCAR in Louisville, Ky.

"We just did a signing," Wright said. "A lot of it's for charity. We all got together at the Hard Rock in Hollywood and did a signing of guitars and drum heads and product, and CDs and DVDs and everything. Now I just heard there's a million and a half samplers out there. Blockbuster has 525,000 at their stores. It tells people to go check it out, and if they like it go get the record. It's seasonal, so this hopefully will set it up. It will make people aware of it. We want to get the video out there and in late fall next year they can do it again and actually maybe tour this thing. I don't know what they plan on doing with regard to that.

"On the DVD, Dave Ellefson from Megadeth put together the band out in Phoenix with his guys from F5, and they rehearsed it," Wright said. "They called me basically to production coordinate it and stage manage it, and kind of run the production end of it from the show stage point. It took two days of rehearsing with a five to six camera shoot, and actually performed it in front of a live audience. It was really an elaborate show. It's amazing how fast it all came together from a production standpoint. They even had metal-sculpted icebergs. It's very cool."