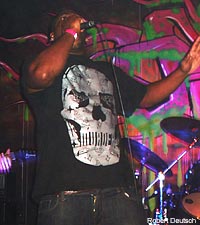 When a band is able to land a support gig for Eyehategod after only a handful of prior live outings, then one could comfortably assume they're pretty dang heavy. Of course for Los Angeles' Noriega, it probably doesn't hurt that three quarters of the band spent time garnering some attention both Stateside and abroad in the extreme metal scene in the now-defunct Black Sheep Wall.

Following the demise of the long-standing Hollywood incarnation of The Knitting Factory, Los Angeles now has a new haven for heavy metal: a former adult cabaret building recently completely revamped and re-dubbed Ultra Violet. On Dec. 12, it was also home to an incessantly heavy show with Eyehategod, 16, the Dolemite Project, the Abominable Iron Sloth, Armed for the Apocalypse, and openers Noriega; a mish mash of bands touring across the country, as well as some local L.A. talent. Translation: It was a packed house.

Amid a freshly painted, 500-capacity warehouse with floors clean and free of the usual stick, a set of moody lighting rigs that puts other area metal clubs to shame, and the usual top-notch sound that booking company Church of the 8th Day provides for all its shows, Noriega entered the night's set shortly after 8 PM to the band's opening, drudging wall of feedback. Gradually building from bassist Brandon Gillichbauer's lone rumble and screeches, drummer Jackson Thompson slowly added lurching crashes of cymbals until guitarist Andrew Hulle joined the fray with a down-tuned wall of guitar sound a minutes or three into the set. Vocalist Trae Malone was last to join the sonic density, but arguably offered the heaviest addition to the band's set, limiting his powerful, deep growls to the band's brief but brutal set.

Encompassing five songs, the performance was topped off by the 12-minute album closer 'Ballacaust,' which featured Gillichbauer barking screechy vocals to compliment Malone's deeper timbre. Across the song's plodding ending, the stage was drenched in rotating blue-and-white lights to contrast a swath of orange, seeping sheen that stuck around throughout the set, thanks to Ultra Violet's big rig and plenty of open space. Noriega was greeted by a healthy applause for such a young, new band.

Dec. 8 saw the release of the band's debut, the EP Desolo, through Viable Records on CD and limited-edition cassette tape. Meanwhile, the band is already hard at work constructing songs for what will be their first full-length and the follow-up to 'Desolo' and planning more shows.