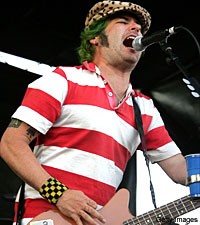 Never one to pull punches and avoid controversy, NOFX frontman Fat Mike is now ready to incur the wrath of metal fans. In a recent interview with Noisecreep, the punk rocker discussed a new song about the history of Iron Maiden and what happened after he called Avenged Sevenfold "the epitome of what's wrong with rock and roll."

First off, the Maiden dissing -- NOFX's latest album, 'Coaster,' features a song about the legendary metal band's history called 'Eddie, Bruce and Paul,' which puts Maiden's iconic mascot and its most prominent frontmen in a bizarre love triangle. "I was just thinking that some of their songs are so good and they were just so cool when they had Paul Di'Anno in the band," Mike tells NoiseCreep. "Then they got Bruce Dickinson, this falsetto f---, and for me, it just ruined everything."

Mike references Di'Anno's 1981 controversial firing over drug abuse in the line, "Paul loved his cocaine and Eddie hated punks." "They kicked him out for doing drugs," Mike says. "Come on. They kicked him out because he was a punk rocker and overweight." The song continues with lyrics like "Eddie broke it off with Paul to look for a new man" and "How you supposed to rock 'n' roll without substance abuse/Number of the Beast is in bed with Rob and Judas Priest." "It used to be like a punk rock singer with fast songs, something I could get into, and then they pretty much turned into Spinal Tap," Mike says. "It's just a little song about how Iron Maiden got ruined, but it's sung as a gay love triangle."

The aforementioned controversy with Avenged Sevenfold started in an interview with Campus Circle where Mike said, "They support Bush. Support the Iraq War. Wouldn't accept a drink 'cause they have to play the next day, but tell everyone they party. And play to a f---ing DAT tape." Rather than get angry with Mike, the band was crestfallen. "Their road manager is a friend of ours and he just said 'dude, my guys are ruined. They love NOFX. They even used to cover 'Linoleum' every night. And then you f---ing rant about what posers they are and how they're ruining rock and roll. It's just, you ruined those guys,'" Mike recalls to NoiseCreep, sounding somewhat remorseful. "I didn't mean to ruin them. You know, when I found out they were playing to pre-recorded music, I was like 'that's over the top. You guys are fucked.'"

Though it may come off as harsh, Mike simply sees it as a reality check to keep them honest. "If you guys are going to talk the talk, walk the walk. And they don't," he says. "Guns N Roses were junkies and cokeheads and alcoholics and everyone bought into it because it was true. You can't make that s--- up."

One thing is for sure, Mike knows a thing or two about calling it like he sees it. "I'm utterly honest," he says. "Too honest. I can't f---ing close my mouth, but I certainly don't lie about my lifestyle." We're sure a few Maiden and Avenged Sevenfold fans would like to tell Mike how they honestly feel about him, too.