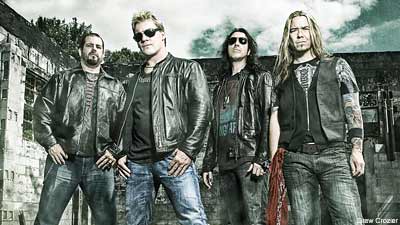 Playing in bands since he was 14, rocker/WWE wrestling star Chris Jericho is a wealth of knowledge about music. So he felt perfectly at ease hosting VH1's '100 Most Shocking Music Moments,' which began airing in December. "I have all this useless information stored in my brain," Jericho told Noisecreep with a laugh. "I remember all this needless trivia. When you get a chance to work for VH1 and 'I Love the 80s,' 'I Love the '90s,' 'I Love the 2000s,' you can use all this useless trivia for the powers of good. I've been working for VH1 for so long, but that was the first time I was able to host a show. It was nice to be on the other side of the coin for once."

Now, Jericho and the rest of his band Fozzy are preparing to celebrate the release of their fourth studio album 'Chasing the Grail,' which is set to hit stores Jan. 26. Jericho said he is looking forward to hearing the fans' response to the collection.

"People always say, 'Oh this is our best album ever,'" Jericho said. "But it really is our best record. There are so many great songs. There's a song called 'Wormwood,' which is 14 minutes long. It's a Dream Theater/Rush-style epic. We never did anything like that before.

"There are a lot of different sides of the Fozzy coin on this record. But it's still all very much a Fozzy record. Although there's a lot of different styles, it all comes back to what we do best -- which is great hooks, great guitar playing. There's another song called 'New Day's Dawn,' which is very strange. At first listen, people are going to be very taken aback. But that's probably one of my favorite songs on the record as well. There are a lot of great tunes. We're really looking forward to everybody hearing the diversity of this band."

Jericho called 'Chasing the Grail' a natural progression for Fozzy, which also includes guitarist Rich Ward, a founding member of Stuck Mojo. "Rich and I have a lot of influence that run the gamut between the Metallica and Iron Maiden," Jericho said. "There are the obvious ones like Ozzy, but there's Journey, Bad Company, the Beatles, Pink Floyd, and that kind of stuff, as well as Dream Theater. Rich wrote all different styles of songs this time, which is great because I wrote all different types of lyrics, too, that he was able to work with.

"Another thing we've never really done before is -- previously Rich would write the songs, and I would write the lyrics -- this time, months before the songwriting process began, I gave him a stack of lyrics and said, 'Here's what I got.' He was able to incorporate that into the songs as he was writing them. It was much more of an organic process, a lot stronger."

Jericho said the previous effort, 'All That Remains,' was a "great record." However, 'Chasing the Grail' is a much more cohesive story from track one to track 12. With his albums, Jericho is accomplishing his lifelong dream of becoming a "rock star," he said. He began his career at age 14, playing guitar and bass and eventually moved over to frontman.

"I started playing guitar, and my cousin Ray had a bass guitar," Jericho said. "At that point, I was already getting into Metallica and Iron Maiden. I loved Cliff Burton and Steve Harris. A friend of mine played guitar. I picked up the bass and I started jamming. I was in my first band when I was 14.

"When I was a kid, I wanted to be a rock star. That was my thing. My band was going to be the biggest band in the world. The only thing is, coming from Winnipeg, Canada, there was the Guess Who and the Crash Test Dummies. That's pretty much the extent [of the music scene]. There wasn't a huge music scene in Winnipeg. I got into wrestling as well. I wanted to be a rock star or a wrestler. Here we are 25 years later, and I've been fortunate to be both. I was able to follow both of my dreams."