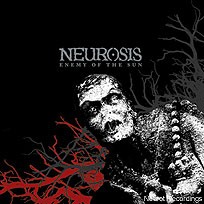 On Aug. 30, San Francisco post-metal pioneers Neurosis will re-issue their 1993 classic 'Enemy of the Sun' to celebrate the band's 25th anniversary.

The follow-up to 1992's bracing 'Souls at Zero,' 'Enemy of the Sun' took Neurosis to new depths of beautiful bleakness, enhancing their dense sound with crushing riffs, ominous samples and tortured vocals -- all of which built from a whisper to a scream and back again over the course of many wonderfully agonizing minutes.

The reissue of 'Enemy of the Sun' features two extra tracks, a demo version of 'Takehnase' and a live recording of 'Cleanse II' along with a fully redesigned package by Josh Graham, the man in charge of Neurosis' mesmerizing visuals live.