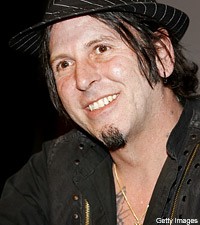 "The most excited I've been about a new band is the Ting Tings, 'That's Not My Name,' L.A. Guns guitar whiz Tracii Guns told Noisecreep. "It's a fun song with some melody in it and it's really interesting musically."

Guns – who has played with some of the biggest names in rock including Axl Rose and Nikki Sixx – thinks having a widespread taste in music is key to being a better guitarist. Still, it's the standards that keep Guns grounded. "Led Zeppelin is my favorite band but Aerosmith is a close second. They are very similar," Guns said.

For Tracii, L.A. Guns evolved from a Sunset Strip band to a family affair. Jeremy Guns plays bass in the band and Tracii taught his son how to play at an early age.

When talking about his son, Tracii's demeanor becomes instantly upbeat: "[Jeremy] likes all the same stuff I did when I was his age. When he was a teenager and in his early 20s, he loved Aerosmith 'Live Bootleg' and Mötley Crüe is his absolute favorite band hands down. He's like me. He practices constantly and he's always learning... but it's been really tough to get him into the old blues and stuff," admits Guns. "That might be an age thing. He understands it and realizes that's the reason why Aerosmith is so cool, it's because they are blues based and he's really been trying to concentrate on his blues style. "