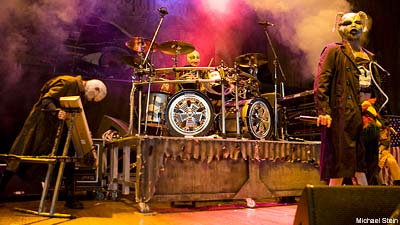 Fresh off the Rockstar Energy Drink Mayhem Festival, the masked men of Mushroomhead are hard at work on a new album, the follow-up to 2006's 'Savior Sorrow.'

"It's definitely a typical Mushroomhead record," said turntablist St1tch, whose band is on tour now with (hed) p.e. "It's got the heavy songs, got the mellow songs. It's got the blended mixes all over the place. It's definitely tapped into a lot of the older roots of the band of the prior releases, like back in the 'Superbuick'/'M3' era when the band was just local and independent, putting albums out on their own. It's just an album that we think our fans will like. That's kind of what we've kept in mind. We want to structure this one so it goes for a live crowd participation aspect. We want songs that [to work] in a live element, too."

The album, expected for release in early 2010, has been in production since winter 2009, ST1TCH told Noisecreep.

"A lot of unexpected things came up," he said. "We were shooting originally for fall release. Now it's pretty much February. Another reason is the label gets the chance for it to be a new record through the whole year. If we released it in the fall, and then two months later it's a new year, and a lot of people who do magazine reviews and features are looking for what's the new release for 2010, now. Not so much what was last year."

On the (hed) p.e. tour, the band will not be performing any new material, he said. That's due to several reasons.

"The main structures and the ideas of the songs are done," ST1TCH said. "Now we're going in to tweak this, tweak that, change this riff, make this part go longer, take some vocal parts and solidify a lot of that. The songs aren't in the state where we would want to go out and play them.

"Mainly, too, anybody who comes to the show has cell phones. They can record everything at a show now. We wouldn't want anything leaking on the Internet. Then you got some hacker kid selling audio online. There's nothing we can do about it. To avoid that, we're keeping everything under tight wraps."

So far, there is no firm title for the album.

"We usually wait until the lyrics are written," he said. "Once a solid theme is there. Once the theme is there, we base it around what the artwork starts looking like for the record. We'll look at the image, usually the album name is the last thing to get picked."