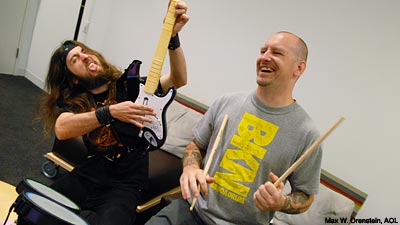 We get a lot of cool guests stopping by Noisecreep headquarters, and recently we had one of our absolute favorites pay us a visit. Dave Witte and Phil Hall are best known as the lethal rhythm section for Municipal Waste and when they were in New York to do some promo, we invited them over.

The Richmond, Va. thrash terrorists have built a huge and loyal fanbase with albums like 'Hazardous Mutation' and 'The Art of Partying,' but it's their live show that keeps people coming back time after time. Their shows are interactive experiences that involve everything from beer funnel challenges to boogie board crowd surfing. Municipal Waste will be releasing 'Massive Aggressive,' their hardest album yet, in August. So expect to see a lot of them in the coming year.

While they were visiting with us, we couldn't really party with the boys like they're used to. But hey, we do have 'Guitar Hero'! So Witte and Hall got their game on, and we have the photos to prove it. We asked Witte about his gaming history and what a Municipal Waste video game would be like. Based on his description alone, someone needs to get behind the concept!

What classic video games did you grow up playing and which ones were you good at?

I'm a huge fan of 'Ms. Pac Man,' 'Asteroids,' 'Space Invaders' and 'Donkey Kong.' 'Smash TV' was also very cool. 'Doom' was the game that really got me back into gaming. It revolutionized gaming to what it is now I think.

Which home consoles have you owned through the years?

No, not really. Maybe 'Doom' I guess but I didn't like using the keyboard to play games.

When you stopped by the Noisecreep offices recently, you played 'Guitar Hero.' Which bands would you like to see be added to the game? How about a classic death metal edition with Demilich? 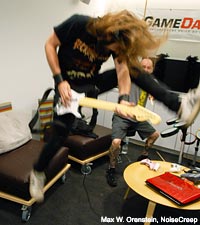 That would be super cool! The 'Classic Death Metal' version in my world would contain Morbid Angel, Autopsy, Lesch Nyhan, Incantation, Ripping Corpse and Deceased. Of course when you pick Deceased or Autopsy you'd have to sing and drum at the same time. There are many others that could be included as well. You could also have Florida vs. battles, etc.

Visually, Municipal Waste's imagery would lend itself great for a video game. Would you be into doing something like that and what would the game be like?

I love the idea and the options and ideas are limitless. It could be part action adventure where you go to the show and try to get on stage and stage dive kind of like a skateboarding game where you pull off all the crazy moves for points. A balcony jump would be huge points. Not getting caught by the bouncers or getting thrown out would be also be involved in the game play. Different venues and that would be only one adventure. There could also be drinking contests with chugs & funnels, etc where you would tap the controller as fast as possible like the old track and field games ... haha. Man you could do a lot, it would be fun.