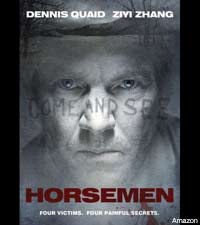 The movie stars Dennis Quaid as Aidan Breslin, a busy detective and widower with a teenage son and a seven year old boy. Since Breslin is always working, he rarely sees his family and leaves his eldest to baby-sit and essentially raise the younger child. Over the course of the film, Breslin goes from being a largely absent parent to a virtual shadow when he is assigned to investigate a string of bizarre murders linked to the Biblical tale of the Four Horsemen of the Apocalypse. In every killing four assailants videotape the carnage as they torture their victims and string them up by hooks attached to bondage racks that resemble something from a death metal album cover.

Following a break in the case, Breslin arrests one of the horsemen, a teenage girl who kills her mother, a woman unaware that her husband had sexually abused the girl in her youth. From there, a link develops between the victims and those who abused or neglected them over the years. And when the imprisoned teenage killer starts to give Breslin clues about the motivations of her group and their future victims, he and his family become inextricably linked with the bizarre story.

"Horesemen" is slick, suspenseful and visually striking, featuring stunning natural shots alongside the rapid edits and odd camera angles informed by Åkerlund's background in videos. The plot isn't all that original, and there are numerous references to other thriller/horror movies including most obviously Jonathan Demme's 'Silence of the Lambs' and David Fincher's 'Seven.' But 'Horsemen' is still gripping. And it offers morality lessons many of its peers lack, and in the end stands as much as a lesson in child rearing as it does a pulse-raising, blood-dripping thriller.

'The Haunting in Connecticut' (Lionsgate) – Based on the supposedly true story of the Snedekers, a Southington, Connecticut family that experienced paranormal activity in the '80s, 'The Haunting in Connecticut' is a throwback to late '70s movies like 'The Amityville Horror.' And that's its biggest problem. There's nothing here that audiences haven't seen before, and while the film is definitely creepy, the stuff that kept viewers awake at night 35 years ago is tame compared to the content of various modern slasher titles.

The movie stars Virginia Madsen as Sara Campbell, a dedicated family woman who moves her family to Connecticut so her teenage son Matt (Kyle Gallner) can receive experimental cancer treatment. As it turns out, the house was once a funeral home (that's what you get for not reading the small print), and the paranormal residents aren't exactly at rest. From there, the stage is set; in other words, let the hauntings begin. The character most directly affected by the ghosts is Matt, who sees lots of the pissed off apparitions, but since he's on medication for his disease, his sightings are largely dismissed as hallucinations caused by the drugs. Only the town priest (Elias Koteas) is a believer, and his faith in the boy may mean the difference between life and death. If you're a fan of things that go bump in the night, 'The Haunting in Connecticut' is a tame but entertaining thrill ride. If, however, you prefer movies that go for the jugular and leave messy spatter, seek your horror elsewhere.

'REC' (Sony) -- Before there was 'Quarantine' there was REC. This Spanish movie came out in 2007, and with no real budget created a world of anarchy and insanity that's both terrifying and nail-bitingly intense, inspiring Hollywood to create a U.S. version and release it on DVD before Sony picked up the original title. Like 'Cloverfield' and 'Diary of the Dead,' 'REC' is unraveled through the lens of a video camera. In this case, a Madrid TV crew is assigned to film the lives of fire fighters for a documentary, but when they follow a police radio call to a local apartment they discover an old woman who has bitten a policeman and infected him with a strange virus. Of course, the cop turns into a zombie, and before long all hell breaks lose. To contain the contagion, the building is quarantined, trapping the news crew, firefighters and tenants inside while the camera continues to roll. Avoid the slick remake and catch this gritty classic instead.