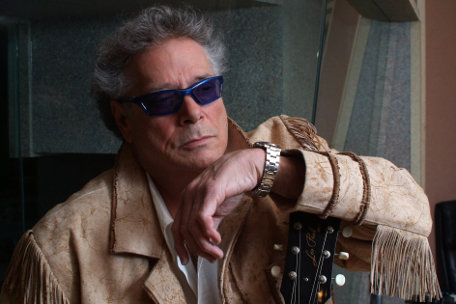 Mountain guitarist Leslie West, who had his leg amputated earlier this year due to a battle with diabetes, had to table his planned tour with fellow guitarist greats Michael Schenker (ex-Scorpions and UFO) and Uli Jon Roth (ex-Scorpions). It was a going to be a wet dream for guitar nerds, but it never got off the ground. Turns out the tour had to be canceled because of transportation issues central to the 'Mississippi Queen' rock legend.

In June of this year, West had his lower right leg amputated as a result of complications from diabetes. The Queens, N.Y. native's latest album, 2011's 'Unusual Suspects,' features guest appearances from Slash, Zakk Wylde and ZZ Top's Billy Gibbons, among others.

In a recent chat with Guitar World, West mused about he should be on the road right now. He said, "I should've been on tour with Uli and Michael now but believe it or not, we could not find a tour bus for me that had a wheelchair lift. Because I can't walk on my leg with a walker; I'm just learning. I've only had it for a few weeks. But there is not one tour bus in the whole United States that is equipped with a wheelchair lift on the outside."

West did reveal that a custom bus was being considered but there was an issue with the timing. He said, "The aisles on a bus are very narrow and this one company was going to do a bus and they were willing to do it for free, but there wasn't enough time for them to rip it apart and make the insides bigger, the aisles bigger and make it easier to get into the bathroom to shower, and so there wasn't enough time to do it. So we had to put it off and postpone the tour. I thought I would be ready, but I didn't realize we were going to run into that problem."

Hopefully this will lead to changes in standards by tour bus vendors and West finds a bus to satisfy his needs so he can tour effectively, efficiently, comfortably and safely.