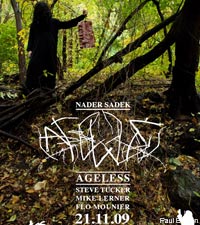 'Ageless' is the third installment of Sadek's, along with previous projects 'Faceless' and 'B'doun Wag'h,' which explored the concepts of intimidation, fear and prejudice within both the underground death metal lifestyle and strict Middle Eastern society.

As for the inspiration behind the project, Sadek explains, "For a while now, I've been interested in exploring what different cultures perceive of as extreme. It grows out of years of walking the crowded streets of downtown Cairo dressed as a full-on death metal fan. Then, in a sort of twisted reversal, I decided to walk the streets of New York's Times Square in the black garb of a fully veiled woman. The intense reactions I got in each case confirmed for me the potential of this project. I hope that by reflecting back to the audience their paranoid fantasies, which totally oversimplify the reality of Middle Eastern and death metal culture, that my work will get them to question their own prejudices and sense of the extreme."

As for the project's metamorphosis into 'Ageless,' Sadek goes on that, "While there are some parallels between those extremes, the project, to me, has now become about how the comparison is impossible. The absurdity of the perception of peripheral cultures has now fused and become one. It is a play on the misperceptions of cultures in the first two projects. Everything has been deconstructed from two and reconstructed as one."