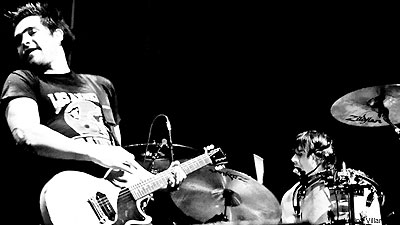 "We wanna thank Alice in Chains for getting us out of Sacramento," Middle Class Rut guitarist Zack Lopez graciously said before the band played their last song on March 9. The California-stationed duo was one hell of an opener, even though they only played for half an hour. Their sound is somewhere between Stone Temple Pilots-type alt rock and Fugazi-era hardcore.

Drummer Sean Stockham let a little bit of his hardcore rage out on stage -- and not just on his skins, either. In mid-song, Lopez' mic stopped working. Because what happened next was so unexpected, I couldn't tell if the song was finished or not. All I know is that Stockham ran from behind his drum kit to the vocalist's mic. He took the mic and mic stand down like it talked about his momma.

"I'm usually not a violent person," Stockham admitted after the incident and after a replacement mic reached the front of the stage. It was, after all, his 42nd birthday. And who can blame a birthday boy for being angsty?

Middle Class Rut have yet to release a full-length studio album, despite recently announcing the recording of one. I guess we'll just have to wait. Until then, be sure to check out their most recent EP called '25 Years' available on Bright Antenna. The Alice in Chains tour ends March 21 in St. Paul, Minn.