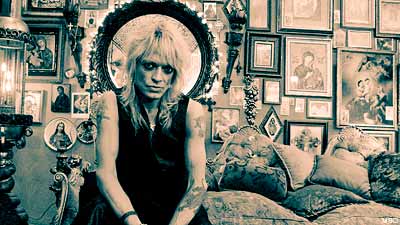 Even though Michael Monroe has been writing, recording and touring since the late '70s, his schedule hasn't been busier than it in the last few years. From 2002 till last year, the Finnish vocalist reunited with his legendary glam rock combo, Hanoi Rocks, and spent much of the year out on the road supporting three new studio albums. The second run for the band was capped off with a series of sold-out farewell gigs in their native Helsinki. Never being one to sit around at home, Monroe held a press conference hosted by pro skater, video director and MTV personality Bam Margera at Swing House Rehearsal & Recording Studios in Hollywood, Calif. late last month to announce the members of his new solo band.

The Michael Monroe solo band will now feature bassist Sammi Yaffa (Hanoi Rocks, New York Dolls and Joan Jett & the Blackhearts), guitarists Ginger (the Wildhearts) and Todd Youth (Murphy's Law, D-Generation) alongside veteran drummer Jimmy Clark, who has played with everyone from Rick Derringer to Wynonna Judd. The new lineup will start wowing crowds at this year's SXSW festival and then a West Coast run in March.

In a new posting on his website, Monroe spoke about his new band, "I'm back in snowy Finland after three very productive weeks in Los Angeles. Had a great time rehearsing with the guys in the band and stuff." While in California, the vocalist apparently hung out with modern rock royalty, "Chris Shiflett from the Foo Fighters invited us to see him, so one day after rehearsals me and Ginger went to meet him at the incredible Foo Fighters studio. He was working on a cool sounding track that needed some harmonica on it, and I was happy to oblige.

"Actually, the first time I met Chris was in 1989 on my 'Not Fakin' It' -- U.S. tour. Chris had a band called Lost Kittenz back then, and they were opening up for my show in Santa Barbara." Noisecreep is excited to hear that collaboration when it hits stores! Monroe closed out his update with, "It was great meeting my pals like Duff McKagan, Alice Cooper and others. All in all it was a great trip and I'm really looking forward to going back for the West Coast tour, to finally play some live shows with this band!"

Fans can keep up with Monroe and his new band via the 'Michael Monroe Mobile Backstage' mobile application available now. In addition to viewing and sharing videos, pictures and messages both ways directly with the band, users can comment and rate all material and also connect with other fans. The application works in iPhone, iPod Touch, most of Nokia and Sony Ericsson phones and many of LG and Samsung models.