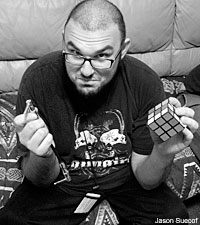 Anyone who has heard heavy metal producer Jason Suecof's old project Crotchduster knows the man who calls himself a "fat, crippled Jew" has a phenomenal sense of humor. Ultimately, Crotchduster wasn't a serious band at all, but rather a joke project and a statement on a scene that rarely laughs at itself, or very frequently takes itself way too seriously.

Since his Crotchduster days, Suecof says he's had little time, if any, to work on his own music, having been the very definition of busy the last few years, producing albums for the likes of Trivium, Black Dahlia Murder, Bury Your Dead, God Forbid, Chimaira, and Evergreen Terrace. But for a while there, Suecof wasn't so busy, and helped alleviate his boredom by crafting spot-on parodies of some of metal's biggest names. For years, some of these joke songs have been passed between bands on the road, building Suecof something of a reputation as the genre's answer to Weird Al Yankovic.

"They're incredible," commented Bury Your Dead guitarist Brendan "Slim" MacDonald, who has heard some of Suecof's parodies. "To the tee, you wouldn't know the difference. That guy is a 110 percent genius. He could never ever not be good at something he tried to be good at."

Suecof's dalliance with joke metal tunes started years and years ago when he still lived in Connecticut. He worked with a bunch of guys in a project called Metal Meat, and they would routinely create parodies of bands like Sepultura and Morbid Angel, and try passing them off as the real deal. Then, in time, he started making parodies for Roadrunner Records A&R titan Monte Conner.

"If he wanted to sign a band, I would send him a parody of me doing that band, doing the vocals, and I'd just sing his name over and over again. It was pretty stupid," Suecof explained to Noisecreep. "I think metal is pretty funny, in general. For the most part, it's four to five dudes, and one of them is just growling. After hearing it so much, I get it. It's only been like 15 years, but I finally get it. When you can look at metal as being fun, and you can step back from it, you have more fun making it. I have fun as a musician and a producer, it just depends on what level I want to get myself involved in a project and what a band wants me to do, as far as writing or just producing. I can do either, it's just hard for me to shut up because I'm such a fat Jew."

Five years ago, when Suecof's Audio Hammer Studios in Sanford, Florida, was only being used by professional bands once every five months, Suecof says he had a lot of time to work on these parodies, like the one he did of Ill Niño, which he recorded himself as Dill Piño, and another he did of Shadows Fall, called Shadows Balls.

"Me and my brother-in-law were just bored," he recalls. "I wasn't really working back then. I had no work, so I'd sit around and make joke metal songs. When you're working so much, like I am now, you don't want to go into the studio and make joke records. I need a few months off, and then maybe I could make some music. I haven't had an actual vacation, where I left my house and went somewhere, since 2006."

Unfortunately, Suecof doubts he'll ever put together an album of these gems for commercial release, meaning these parodies will only be heard by a select few. But, he did tell us that we could let you all in on the gag. So, now, for your listening pleasure, Noisecreep presents the well-kept insider joke "Shadows Balls."