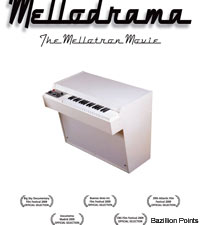 Guitar, bass and drums are the conventional instrumentation for nearly all heavy metal. Some bands have also used organs or synthesizers, and throughout the history of the genre, a select few have utilized the Mellotron, a magnetic-tape keyboard originally invented as the Chamberlin organ in a California garage in the late 1940s.

Black Sabbath used the primitive sampler on at least four mid-'70s albums, most famously to simulate a string section on the 1972 hit 'Changes.' Sabbath guitarist Tony Iommi discusses his fascination with the instrument in the new DVD 'Mellodrama: The Mellotron Movie,' which is being distributed by Bazillion Points, the book company launched by Ian Christe, author of 'Sound of the Beast: The Complete Headbanging History of Heavy Metal.'

Other metal artists featured in 'Mellodrama' include Opeth keyboardist Per Wiberg and guitarist Mikael Akerfeldt and Bigelf frontman Damon Fox and drummer Steve Frothingham. "Any instrument can be a metal instrument," said Wiberg. "It depends on the attitude you have when you're playing."

'Mellodrama: The Mellotron Movie' was written and directed by Dianna Dilworth, and also includes interviews with members of the Moody Blues, King Crimson, Genesis, Cheap Trick, the Beach Boys, Goblin and many others. The film chronicles the history of the instrument from its birth through its glory years in the '60s, all the way to its cult like adoration by contemporary Scandinavian bands, including the Shining, Enslaved and Opeth.

The movie is the first DVD contracted by Bazillion Points, and Christe has been much more than just the distributor. "I was involved with the movie since the beginning, even holding microphones and carrying gear on a lot of the interview shoots," he told Noisecreep. "As I became aware of the Mellotron's role in dark, spooky metal and horror film music, I pushed for that to be part of the film.

"There's definitely a connoisseur's awe about the instrument, it's an unpredictable piece of gear with an unmistakable sound and a huge historical role in rock music. I knew the DVD audience would appreciate the kind of careful, detailed approach that Bazillion Points has already done with our books. Plus there are a lot of connections to our Swedish Death Metal book via Opeth and others, and our upcoming Mean Deviation progressive heavy metal book by Jeff Wagner."