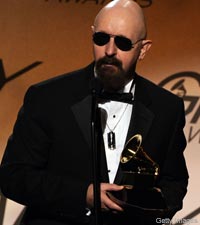 Even though Rob Halford claimed that 'his moment' at this year's Grammys would be seeing Elton John and Lady Gaga perform, and thus confirming the rumor about that live collaboration, the Metal God certainly has something else to celebrate! Judas Priest picked up the Best Metal Performance Grammy for 'Dissident Aggressor' from 'A Touch of Evil -- Live.' Priest beat out Slayer, Megadeth, Ministry and Lamb of God -- who missed the ceremony (and the after parties drummer Chris Adler told Noisecreep he was looking forward to) due to being snowed in in their native Virginia.

In his acceptance speech, a tuxedo-clad, shades-sporting Halford said, "The fifth time is the charm." He mentioned that Priest have been making metal for 25 years and that they still love what they do. He also remembered to thank all the radio stations and press that have supported the band, and he dedicated the award to all heavy metal fans.