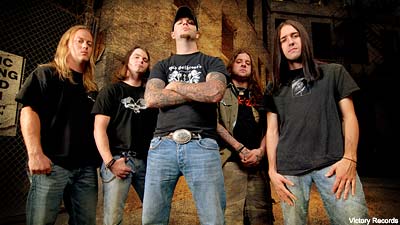 Not too many fans of melodic metal band the Autumn Offering are also into deathcore outfits like Whitechapel and Winds of Plague. However, the band's label, Victory Records, is also home to deathcore acts like Emmure, Carnifex and Wretched. Common sense would suggest that the Autumn Offering vocalist Matt McChesney would therefore hold off from speaking his mind about the genre. Then again, nothing stops McChesney from speaking his mind.

"I personally don't understand the backlash against metalcore," he tells Noisecreep. "To me, that stuff's better structured and features better songwriting than most deathcore. That stuff is just garbage. Cannibal Corpse already did it 15 years ago, and did it way better."

When asked to elaborate, McChesney admits he likes Job for a Cowboy and Suicide Silence, but argues that the bulk of deathcore groups are trendy and unskilled. "To tell you the truth, I don't think people care if something's been done before or even if it's done well," he continues. "People today like what they're told to like. Some of this music is so bad and it still sells because it's trendy or whatever. I can't honestly grasp the fact that people hear most deathcore and say, 'I love this. I have to buy this.' I mean, if a band is popular on MySpace, it translates into 15-year-old kids going, 'Wow, they have 30,000 MySpace plays a day. It must be good.' That's so backwards, and it somehow translates into album sales."

As dismayed as he is by the popularity of deathcore, he's far more disgusted by the success of a group he's happy to call out by name.

"Look at Hollywood Undead. That's the worst s--- ever," he argues. "It's terrible, but people say they love it and they buy it because it's spoon-fed to them. I've just given up on that world entirely. I don't care if one person buys our new record. I'm happy with it, and to me that's all that matters. I've really given up on the record-buying public."