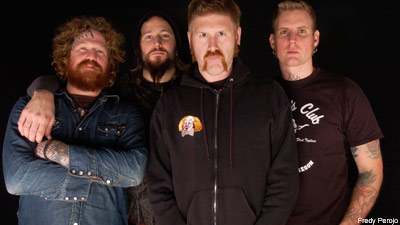 It's official! For weeks now, there have been rumors of a spring Mastodon tour, one that would concentrate on not the U.S. major metropolises, but the secondary markets they didn't reach on their last tour.

According to Mastodon, the shows will "bring the band to the fans in American cities that have yet to experience the 'Crack the Skye' live event." The band will also be offering a limited tour-only color vinyl edition of 'Crack the Skye' during the spring run, which will also feature Between the Buried And Me, Baroness and Valient Thorr.

The band has also revealed that, on April 17, they'll release a special vinyl version of 2006's 'Blood Mountain' in both standard and deluxe editions. The reissues will be pressed on double 45 RPM disc on heavy 180 gram vinyl housed in a gatefold sleeve, featuring new custom artwork from Paul Romano.

Filed Under: Baroness, Between the Buried and Me, BetweenTheBuriedAndMe, Mastodon, Valient Thorr, ValientThorr
Categories: News
Comments
Leave A Comment
Back To Top