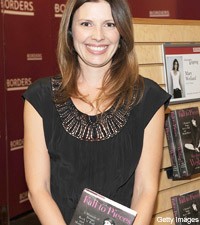 Drawing inspiration from public figures like Brooke Shields and Carrie Fisher, who documented their own personal struggles through the written word, Forsberg explains, "I reject the stigma that the words 'mental illness' carry and I'd love to be a part of the movement to eliminate it.

"After my bipolar diagnosis, I read countless books on the subject. I had a difficult time connecting to them because my story often lacked the intense mania that so many people struggle with. I'm hoping that someone who may be wrestling with similar demons to mine can find even an ounce of hope in 'Fall to Pieces.'"

And while she felt it was important to share her story, Forsberg, a doting mother to her two children with Weiland, also discusses her fears of how revealing her battles and breakdowns could affect her family: "Overall, I'm an honest and open person, so spilling my beans came quite easy, but memoirs and motherhood is a difficult marriage to broker. Keeping authenticity while trying to protect my children felt a lot like walking a tightrope. In the end, though, I was able to write about that challenge, too, so the whole process felt like an honest entry in the so-called diary that became this book."

Released to high praise and much buzz, Forsberg's book is available through William Morrow/Harper Coliins and chock full of the big names (Dave Navarro, Robert Downey, Jr. and Leonardo DiCaprio, among others) and even bigger breakdowns (Forsberg recalls wearing turtlenecks to cover needle-marks and setting Weiland's clothes on fire on the couple's front lawn) that led to her life-changing diagnosis.