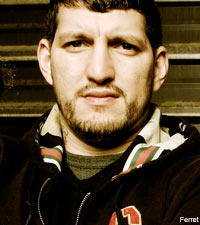 Madball vocalist Freddy Cricien is branching out and showing his Catholic guilt, so to speak. Cricien and producer DJ Stress have teamed up for Cricien's solo album, titled 'Catholic Guilt,' which is due out Nov. 4 via Cricien's own Familia Entertainment. Cricien and Stress, who also has a hardcore background, planned to work together a few years back, but Cricien got sidetracked by his Hazen Street project.

"I think a portion of Madball fans will definitely feel this record," Cricien told Noisecreep. The album isn't a retread of what Cricien does in Madball and will feature him singing, rhyming and yelling, flexing new and different creative muscles.

The album will center on boom bap beats and rock breaks. "Obviously, the ones that appreciate hip-hop [might like it], but even just the open minded heads in general that love music. They'll be into it. I hope."

The album's guest list includes members of Rancid, Jedi Mind Tricks, La Coka Nostra and Travis McCoy of Gym Class Heroes. As for the lyrical theme and the nudge-nudge title, Cricien further commented, saying, "I grew up being a not so great example for Christians. But then again, who is? There's a lot of hypocrisy with organized religion in general, and I question a lot of things about it. The other part is that constant struggle within me and people, between good and bad, heaven and hell. A lot of the songs show different sides of me, through real experiences, the good ones and bad ones. The struggle continues."