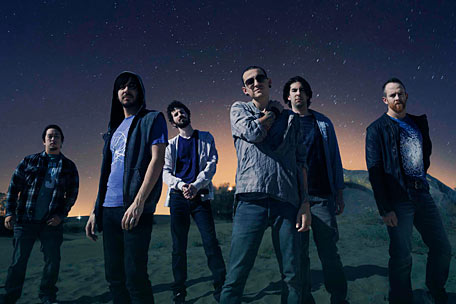 As the release date for Linkin Park's 'A Thousand Suns' inches closer, the band continues to debut more new songs to give their legion of fans a taste of the new album, with 'Blackout' and 'Waiting for the End' being the two latest cuts released. 'Blackout' is one of the screamiest Linkin Park songs we've heard in quite some time. The aggro vocals are punctuated by plenty of scratching and loads of thumping beats. Three minutes in, it gets contemplative before bursting into a full-on sonic assault.

Once you get your fix from 'Blackout,' you can move on to 'Waiting for the End,' which will satisfy your jones for the perfect rap-rock fusion and is one of our favorite songs of the year. The song is erected on a thunderous beat and boasts pretty, mellow and ultimately chill vocals.

Linkin Park essentially achieve the impossible with 'A Thousand Suns,' which is to meld urban rhythmic thrust with rock 'n' roll intensity and aggression -- without sacrificing either genre's hard-fought integrity. It's another beautifully bipolar exercise in mood and tempo dynamics, so strap yourself in and let Chester Bennington, Mike Shinoda and Linkin Park take you for a ride. You'll be bobbing your head and flailing your fists in the space of the four minutes.

'A Thousand Suns' is due in stores Sept. 14. But while you wait, put 'Blackout' and 'Waiting for the End' on repeat.