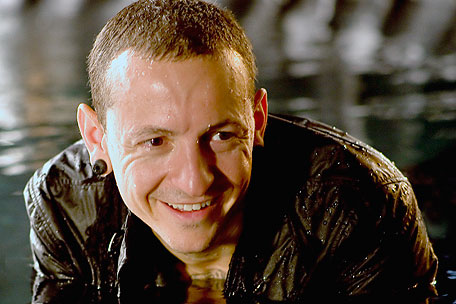 'The Catalyst,' the lead track from Linkin Park's forthcoming 'A Thousand Suns' album, might be the most musically sophisticated piece of music the band has done yet -- an intricate, complex wave of emotion that moves through multiple shifts in tempo, from the aggressive beat throughout to the beautiful piano denouement. The video appropriately reflects -- showing a post-apocalyptic scene that involves lots of moody lighting -- a hooded Mike Shinoda looking rather sinister throughout.

Noisecreep got some exclusive behind the scenes photos from the making of the clip, which was once again directed by Mr. Hahn, who filled us in a little on the pics. "The irony of making the video was that the inspiration for the colors came from the Color Festival in India called Holi," Mr. Hahn explains to Noisecreep of the explosions of color that come near the end of the video. "People collect these pigments throughout the year to release them in this festival as a celebration of life and tribute to Vishnu. When it came time to shoot these scenes, there wasn't much celebration.

He continues, "So participating in the scenes would sacrifice the quality of the record, because the powder would affect their proper respiration. I guess that may have added to the emotion of the piece. But once the powder started being flung around, it wasn't so bad. Also, needless to say, there wasn't any injuries during the filming of this post-apocalyptic visual clip, and we were able to complete the album with the intended quality."

It wasn't an easy video shoot on multiple levels, though, especially for lead singer Chester Bennington. "On day two of the shoot, I shot scenes of Chester under the surface of water. I have a tendency of illustrating Chester under excruciating situations. Mainly because it matches the music so well," Hahn says. "He wasn't very thrilled about the idea of singing and water going up his nose. When you watch the video, the pain and agony is genuine. I guess the good thing is that the water from day two acted as a cleansing agent of any powder left in the sinus from the day previous."