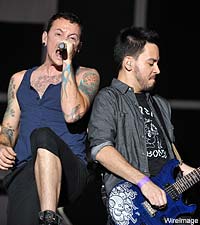 At this very moment, Linkin Park are working hard on the follow-up to 2007's 'Minutes to Midnight,' which should be out sometime next year. In the meantime, to tide fans over, Linkin Park will be releasing a rarities set. Unfortunately, you're going to have to be a member of the band's fan club, the Linkin Park Underground, to get it.

On Dec. 3, 'LPU9: DEMOS' can be purchased together with a fan club membership. More information is available at the band's Web site. 'LPU9: DEMOS' boasts nine unreleased demo versions of some of the band's biggest hits, including 'Faint,' 'Breaking the Habit' and 'Leave Out All the Rest.' There's also an unreleased track called 'Across the Line,' which fans have been clamoring for since first hearing parts of it in studio updates for 'Minutes to Midnight,' along with an acoustic track from LP offshoot Dead by Sunrise, called 'Morning After.'

"Songs change constantly over the course of the creative process, so we thought it'd be cool to share early versions of familiar tracks," explains Linkin Park's Mike Shinoda. "The versions in this collection represent important moments in the evolution of each song: different vocals, music variations, and missing parts. They're snapshots of our works-in-progress."