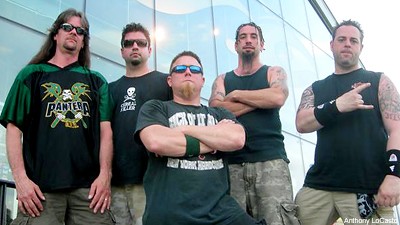 Life of Agony guitarist Joey Z. isn't remaining idle while his longtime Brooklyn band is somewhat dormant. Somewhat, since LOA are playing shows here and there and heading to Europe to hit a few summer festivals shortly. He opened Method of Groove studios, a 48-track Pro Tools facility in his native borough, which is named after a song on LOA's now-classic 'River Runs Red' album. He recently produced an album titled 'Fifteen Years of Aggression' by the band Misery.

"The first time I met with the Misery guys, I knew right away they were in it for the right reasons," Joey Z. told Noisecreep. "Not only did they have the right attitude, they immediately gave me the sense that they all shared a common goal and had true camaraderie between them. Upon hearing them play together the first time, I had no doubt that we, as a team, were going to turn out a great product."

The guitarist, who also did time in the post-LOA rock band Stereomud, obviously projects passion, enthusiasm and excitement for his studio endeavor and he is available to engineer, mix and produce records at the studio. He worked on a track with Sick of It All and worked on vocals for the new Anthrax in his studio.

Download Life of Agony Songs
Filed Under: Anthrax, life of agony, LifeOfAgony, Misery, sick of it all, SickOfItAll, Stereomud
Categories: Interviews
Comments
Leave A Comment
Back To Top