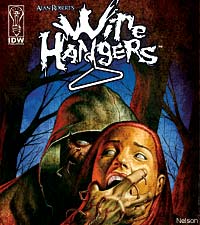 Long before Life of Agony bassist Alan Robert became a musician, he wanted to be a professional comic book artist. Now, his dream is finally coming true. In March, IDW Publishing will release the first of a four-part monthly series called 'Alan Robert's Wirehangers.' Written and drawn entirely by Robert, 'Wirehangers' takes place in New York City and is about a series of missing persons cases that police believe may be the work of a serial killer.

"It's a horror conspiracy story, and as the story progresses, there's an undercover journalist that gets abducted to find out the secret behind the disappearances," Robert told Noisecreep. "And what she finds is totally not what everyone expects."

In the past, Robert has created art designs for various bands including Shinedown, Three Doors Down and Puddle of Mudd, but 'Wirehangers' marks his comic book debut. And he has social networking site Twitter to thank for his introduction to IDW publisher/editor in chief Chris Ryall, who offered him the series.

"Earlier this year, I started going on Twitter to follow some of my favorite comic book artists, and it turned out that Chris from IDW was on there," Robert said. "He's a writer, but I didn't realize he was the editor in chief of the whole frickin' company. And he was writing one of the books I was reading, so I started chatting with him. He happened to be a big music fan, and sure enough, little by little, he showed interest in my idea for 'Wirehangers,' and that's how I got the deal."

While Robert happened to be in the right place at the right time, he's clearly qualified for the gig. As a teenager, he went to art school and got a scholarship to the School of Visual Arts to learn cartooning and penciling. There, he studied under Walter Simonson, who worked on such comics as 'X-Factor' and 'The Mighty Thor.'

"He was a great mentor and really taught storytelling and page layout really well," Robert said. "I was on my way to really pursuing that. But [in my] graduation year, Life of Agony got signed to Roadrunner. We put out ['River Runs Red'], and I went on that path. Opportunity knocked and I just opened the door and left on tour."

Even after he abandoned his training, Robert never gave up on art. In the '90s, he conceived many of the characters that appear in 'Wirehangers' and created the scenes for the comic in buses and dressing rooms around the world. Even after IDW Publishing offered him his own comic, he did most of the work for the books while Life of Agony were on tour.

"I had a lot of sleepless nights everywhere," he said. "But you'd be surprised how much time there is to kill on tour waiting around to play an hour set. You show up sometimes at 9 in the morning, and you don't go on until 11:30 at night. So, I would draw all day up until show time, and then maybe after the show I'd color some pages. I was pretty busy out there, but all that work really paid off."