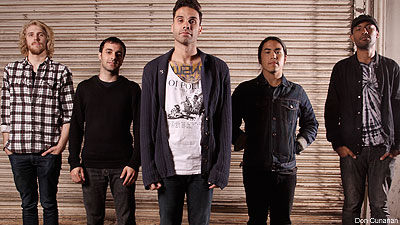 Los Angeles quintet Letlive are managed by Bleeding Through vocalist Brandan Schieppati. That's a 'membership has its privileges' kind of scenario, where it's painfully obvious that having a manager in an active, successful band can only help an up-and-coming band like Letlive, who are reminiscent of Glassjaw with their emotive and screamy, larger-than-life, soulful vocals and post-hardcore riffery. But it's Schieppati's striking good looks that Letlive see as they key to their future.

"Having a successful metal artist [as a manager] is one thing," singer Jason told Noisecreep. "But having one the most attractive men in metal to date is another. His acclaim as a hardcore heartthrob is gonna send us straight to the top. He hasn't said this yet, but tips on being that striking cannot be taught. We're trying real hard to acquire his good looks through osmosis."

Letlive -- who responded to our request for an efficient, Twitter-style bio complete with tweet-speak are "#ll. just got back from the place you go to make your mark in this painfully saturated music scene!! @MUSICINDUSTRY we promise we're the next big thing. RT!!" The band mix of croony vocals and high octane guitars may very well ensure that the band is indeed on the cusp.

Jason also said that his band is "putting forth all our efforts to make it clear that Letlive is something for everyone." There are no limits or genre parameters here! "No elitist facades, no specific type of listener," Jason also said. "We want everyone to feel involved so they can get involved. Touring, playing acoustic on the streets, hanging out at a young children's birthday parties and young men and women's cultural coming of age rites of passage, like Quinceaneras, both Bar and Bat Mitzvahs. You can find us across the board. Oh, and we'll also be putting forth efforts to make sure people know to spell our name as 'Letlive' and not 'let live.'"