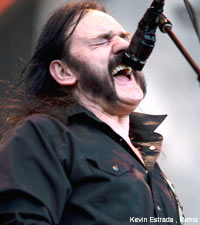 Canadian rock band Danko Jones rounded up an impressive, star-studded cast for the video for their single 'Full of Regret.' It's like a mini-movie. Motörhead bassist Lemmy Kilmister stars, alongside Mike Watt of the Minutemen, actor Elijah Wood and actress Selma Blair. In the super fun clip, Mr. Kilmister plays a mob impresario who hires Wood and Blair to take out Danko Jones.

"We are all humongous Motörhead fans. Having Lemmy in our video is a total honor that we do not take lightly. As you all can see in the video, Lemmy was a total professional and a natural actor," the band told Noisecreep.

Danko Jones next album, 'Below the Belt,' is due out June 8 through Bad Taste. The band also just wrapped a tour with Clutch, but expect to be seeing much, much more of Danko Jones as the year progresses.